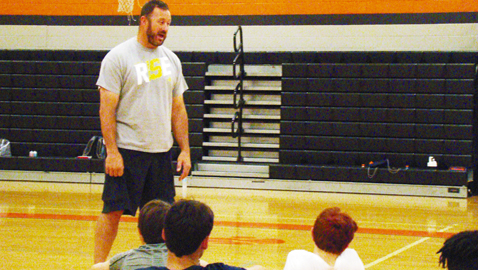 When Scott Galyon’s NFL career ended in 2002, he decided to go into pharmaceutical sales. He was one of many former athletes to find employment in that line of work.

But he quickly discovered that sales wasn’t his calling.

“A lot of former athletes do that,” said Galyon, a Seymour High School graduate, who played football at the University of Tennessee before going pro and enjoying stints as a linebacker for the New York Giants and Miami Dolphins. “It was a great job. The money was good and the benefits were good.

Galyon then answered a call to work for Fellowship of Christian Athletes.

After his playing career was over, he did come back to Seymour, where he played baseball, football and basketball, and served as a volunteer assistant with the Eagles football team.

Now he works for FCA in Knox and Sevier Counties and he spoke to Powell’s young basketball players at the Fellowship of Christian Athletes Presents the Panther Pride Basketball Camp at Powell Middle School.

There, he encouraged the players to have faith in God and to be thankful for the opportunity to play basketball.

Galyon told the campers to enjoy their time on the floor.

“So often today, you hear kids say that ‘I have to get a D-I scholarship.’ But if that happens, it’s going to happen,” he said. “If you can play, they will find you, and you’ll get it.

“But that’s years down the road. And what happens if you don’t get one? That doesn’t mean that you failed. You didn’t fail, because you got to do something that you loved to do for five or six years. That’s success.”

On opening day, the campers received Bibles and Galyon noted that those could serve as inspiration during troubling times.

Spreading his faith is key for Galyon. He also, however, believes that sports are supposed to be fun.

“I wasn’t heavily recruited by I loved playing for Seymour High School. That was big for me. Sure, I dreamed about playing college football. But I didn’t get any [recruiting] letters until I was a junior in high school. I wasn’t all that heavily recruited. I got letters from Tennessee, Georgia and Furman and those were all good programs.”

The amateur sports scene has changed and Galyon believes that those alterations haven’t made sports better.

“I used to be that crazy guy yelling at my son at baseball games,” he said.

He noted that he made a conscious and concerted effort to change his way because “sports are supposed to be fun but people have certainly taken some of the joy out of them.”