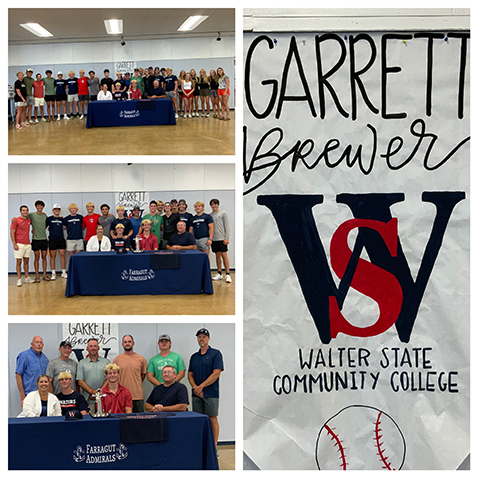 When it came time for Garrett Brewer to decide the next step in his life, he took a little time.

And after much consideration, Brewer, a baseball player and recent Farragut High School graduate, finalized his college plans Wednesday afternoon as teammates, coaches, family and friends were in attendance.

Brewer, the starting catcher for the Admirals on their 2022 Class 4A State Championship team, signed his National Letter of Intent to play at Walters State Community College.

“It took him a while to decide what he wanted,” Buckner said. “I don’t usually say much at these signings, but I’m really proud of him. He was the backbone of our state championship team, and he caught four games in the state tournament with a torn hamstring, and I don’t know if anybody understands how much that hurts. Most people would tear a hamstring and say ‘I’m done.’

“He’s a character guy and he waited until he got what he wanted. He was a leader for our young team.”

Brewer said that he chose to attend Walters State due to its proud baseball tradition and due to the class sizes at the school.

“They have a good program,” Brewer said. “They’ve had success. Farragut and Walters State have a lot in common.

“I like the small size of the classes because that gives you the chance to have more interaction with your teachers.”

In Morristown, Brewer will be relatively close to home and that’s a factor he also considered.

“I wanted to be a little far away but I also wanted to be able to come home if I needed to,” Brewer said. “This is only about an hour away.”