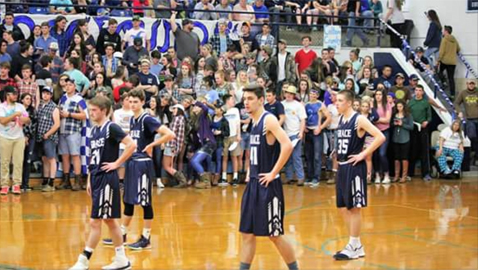 Ninety minutes before tipoff the gym at Hampton was already loaded. That was the setting Grace Christian Academy’s basketball team would have to deal with in last week’s Class A sectional round in upper East Tennessee.

“It was very exciting for the guys to be in that environment again,” said GCA head coach Mike Doig, reflecting on the do-or-die contest via e-mail. “At 5:30, when the doors opened, there was already a great crowd. Game time wasn’t until 7 o’clock!”

Falling behind 23-9 in the first period added another piece to the Rams’ predicament.

But Grace Christian managed to survive 64-63 in a game that wasn’t decided until the closing seconds.

“Three things truly helped the turnaround,” said Doig.  “First, we got a huge spark from Benji Conner (a 6-5 player that came off the bench to get some key rebounds and loose ball pickups that led to some baskets.)

“Secondly, the press that Hampton was putting on us caused us to turn the ball over, and our guys made some great adjustments to how they attacked it and were able to get some good looks at the basket during that run. And third, our defense picked up the intensity and we started covering better together.”

GCA was up by one in a thrilling finish.

“The good thing is that we were in the lead, so the real pressure was on Hampton to make the shot,” recalled Doig “They drove the ball deep into the lane and that is where Baylor (Younker) was able to make a great block/deflection on the pass attempt. And then Hampton picked up the loose ball and attempted a shot, which Connor (Arnold) was able to block. C.J. (Gettlefinger) was able to secure the ball and it was over.

“We were very excited for the boys to be able to make such a great defensive play at the end of the game.”

Arnold led the Rams’ attack with 26 points, including six 3-pointers.

GCA (27-8) will be making its third straight trip to the state. The Rams will face Humboldt (31-1) in the quarterfinals Thursday at 2:15 (EST) at MTSU in Murfreesboro.

“It really doesn’t matter about the draw,” said Doig. “If you’re fortunate enough to get to the state tournament, you have to go through good teams anyway. You just have to come ready to work.”

BEARDEN ROLLS: The Bulldogs also went on the road and sped past Science Hill 86-57 in the Class AAA sectionals.

“The game was played at Science Hill High School,” e-mailed Bearden Coach Jeremy Parrott. “There was a solid representation of Bearden supporters, even with a long road trip.”

The Bulldogs (22-9) will battle Independence (22-10) Wednesday at 11 a.m. in the state quarterfinals in Murfreesboro.