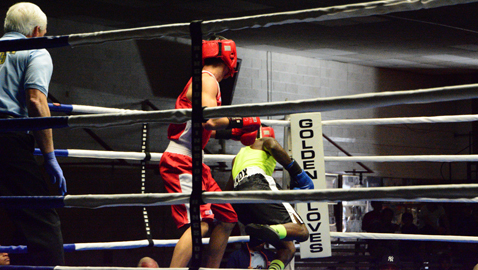 Team Georgia, which had two athletes get a free pass in the southern regionals because they were unopposed, have seven boxers fighting for titles and berths in the upcoming National Championships in Salt Lake City, Utah. That five-day tournament opens on May 16.

Six Georgia boxers were victorious on this night.

In the 123-pound match, Mikhail Montgomery won by technical knockout over North Carolina’s Semaj Young in the third round. At 132, Maliek Montgomery scored a second-round TKO victory over Stevie Massey of North Carolina.

Gravitt, the 141-pound champion won a seemingly lopsided decision over Alijiah Dumas.  Gravitt, who went 3-0 for the weekend, was named the tournament’s Most Outstanding Boxer of the three-day event that began Thursday, April 7.

“The first night, I was a little shaky,” Gravitt said. “Then yesterday, I came back in here and decided that I wanted to go to Utah.

“Tonight, I thought I was pretty good.”

Randy Hardaway, a Team Georgia assistant coach, who primarily trains Gravitt, said that the team is a family but those who make the regional and national cuts must fight the best opponents that the Peachtree State has to offer.

“[Head coach} Michael Montgomery had three of his own kids here tonight,” Hardaway said. “He does a great job. We fight effective fights.

“To get here, these guys have to be state champions in Georgia. We beat up on each other but when we leave the state of Georgia, we leave to win.”

Golden Gloves Boxing is a family affair and even though no Tennessee boxers will be headed west, Coach Montgomery said that he and his boxers will gladly represent the Volunteer State at next month’s National Championships.

“I love coming to Knoxville,” Coach Montgomery said. “We’ll represent Tennessee when we go out there.”

In the 165-pound division, Ulloa won a decision against Alabama’s Thomas Knox.

The heavyweight match between Glanton and Alabama’s DeAndre Nicholson was voted the tournament’s Outstanding Match.

Even though Knoxville won’t be directly represented in Salt Lake City, Knoxville gym supervisor Jack Rose said that he looks for the city and state to eventually recapture past ring glory soon.

“It takes time to develop a fighter. He might fight in the Novice Division for three years,” Rose said. “We have a full gym of fighters and it’s just a matter of time.”

Knoxville’s rich boxing tradition includes a pair of past world champions in the late Big John Tate and North Carolina native Bernard Taylor, who fought out of Knoxville and held the United States Boxing Association Super Featherweight title from 1990-1994.

Tate won the World Boxing Association Heavyweight Championship in 1979. He lost the belt to North Carolina native Mike Weaver in 1980 at Stokely Athletics Center and died homeless in 1998.