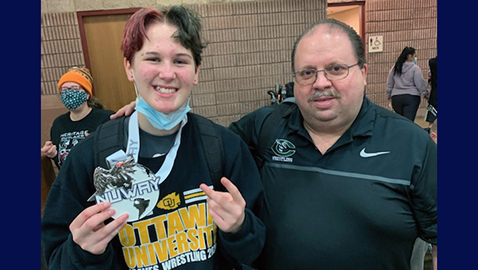 A junior at Carter, she moved to Knoxville from Savannah, Ga., last August.

Tindall, who wrestles in the 140-pound weight class, recently won two tournaments and has a 27-1 record this season, with her only loss coming in December against a wrestler from Riverdale.

She won the Nuway state-based national tourney in Gatlinburg on Jan. 16 and followed that up by taking first place at the Governors Classic at William Blount High on Martin Luther King Day.

Fifteen all-girls teams competed in that tourney and Tindall prevailed with three pins.

“They’re saying she has the ability to win a state championship,” said her father, Matthew.

That would be a first if it happens, as Carter has never produced a state champion in wrestling.

“Win the state,” she said is her goal this season.

Jailynn has been wrestling since her freshman year in high school in Georgia.

“She went to state her first year and won two matches, losing to the girl who finished in third place,” said her mom, Jessica. “In her sophomore year, she finished second in the sectional.

“She was on an all-boys team in Georgia and wrestled against boys until the post-season tournament.”

Jailynn said “wrestling is a lot tougher in Georgia than Tennessee.”

Carter Coach Tim Free helped get wrestling started back at the Strawberry Plains high school five years ago. For many years in the 1970s and early 1980s, Carter and Halls were about the only high schools in Knox County that had wrestling programs and they were big rivals in the sport.

Free graduated from Carter in 1983 and said that was the last season the Hornets had wrestling until 2017.

“I think Jailynn has the best chance of anybody to do it (win state), if she can avoid injury,” said Free. “I’m really proud of her. She doesn’t give up. She listens good. She’s a great kid, the ‘yes sir’ type. I wish I had a hundred more like her.”

But Tindall is “a tough girl” too, added Free. He just wishes she had more of a mean streak in her.

“I’m trying to get her to be rougher,” he said. “She’s afraid she’s going to hurt somebody.

Jailynn’s older brother, Hunter, is assisting Coach Free with the Carter team this season. He has experience in wrestling, having competed as a freshman 184-pounder at Ottawa University in Kansas and earned All-America honors at the Disney Duels in 2020.