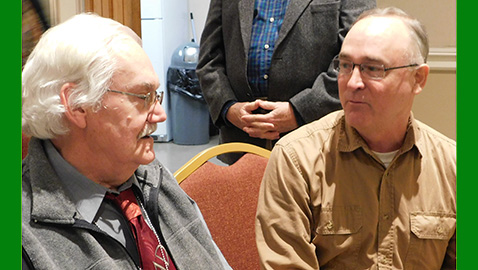 The Knoxville Focus continues to interview interesting people in our area. Charlie Rhodarmer is a man of many hats, indeed. Rhodarmer is the director of the Sequoyah Birthplace Museum in Vonore, Tennessee and active in re-enactment groups. You never know what historic outfit or character he may show up in or be playing. He is often in Knox County for events and is a popular speaker.

How is your position working for you?

Well, I would say it’s been working out pretty good! I came and took the position of manager/director at Sequoyah Birthplace Museum in July of 2000. It’s been a very challenging job and it’s been an adventurous job as well. I’ve been able to utilize my past experiences to help advance our mission at the museum.

My love of living history and blacksmithing has enabled me to introduce outside exhibits and programs. One of probably the greatest pleasures is working with the different people; from our board members, to our volunteers and living historians, they turn work into a fun and learning experience.

How has your position interfered with your private life or hobbies?

For as long as I can remember I have loved history. Around age of 14 I was introduced to reenacting and that helped strengthen my interest, passion and, to some point, obsession! I probably do spend more time than I probably should at work, but when you’re dealing with subjects that you spend your leisure time reading about, some days just don’t seem like work. But to counter, work is work and that’s why I’m paid to come. With every job there are tasks that are not pleasant. Here at Sequoyah there is a lot of variety in a day’s work.

Tell me a bit about your family

My mom and dad were both raised in Haywood County, North Carolina near the town of Canton. Both came from rather large families. Neither of my parents had a real interest in history, but on vacations we always visited historical sites around the South. They both encouraged me to find a job which I felt was rewarding and that I enjoyed more so than for the paycheck. There has been a day or two, I wished they would have pushed me to be a doctor. And then I think to myself: would I want me to operate on me? Oh no! I’m certainly enjoying walking down the path that I have started.

Where were you born and how did you come to East Tennessee?

I was born in Asheville, North Carolina and raised in Canton. Back in 2000, I was working at the National Scouting Museum in Murray, Kentucky. One morning the director walked into the staff meeting and announced that the museum was closing its doors at the end of the season and we were to pack all the artifacts up and move. But he didn’t say where we were locating to. I called a contact at the national office in Dallas and asked if he knew where we were going.

He told me that that was the biggest secret in the national office and no one was to say a word. He then said that he was told to clean out the office building next door. I certainly thanked him. I love the Boy Scouts, but not enough move to Dallas, Texas. I’d heard about the position at Sequoyah Birthplace Museum the previous week. I got in touch with Maxwell D. Ramsey, the chairman, and we met for an interview. And I’ve been here since July 2000.

What are your hopes for our region?

My hope for this region is that it does not become overdeveloped. When I go back to Western North Carolina, so many areas have built all over the mountains. People don’t come to look at houses, they come to look at mountains. Change is always inevitable, but we need to plan for that change. For me the environment or historical sites should be preserved and or restored. Recently some friends and I went to Savannah to do some living history. During our free time we went to the historical sections of Savannah. I don’t remember any of our group wanting to go visit the mall. But hey we were all History Geeks!

What is your main hobby or interest in your private life?

My hobby is living history. For those that may not understand living history, typically you dress in period-correct clothes or uniform and generally you travel to an event and set up a period-correct camp. Spend the night and talk to the general public about that particular site or time over the weekend. Currently some of the events that I’ve been involved in is at Sergeant York’s State Historic Area doing World War I. Participating at Fort Loudoun State Historic Area doing the French and Indian War. Last year I was involved in some events in Texas with the Texas Independence portraying 1762 Lieutenant Henry Timberlake in London with the three Cherokee head-men.

Being involved in living history has provided me the opportunity to meet some really incredible people and develop great friendships. One of the highlights of an event after the public is gone, is just sitting around the fire and talking about history. It’s one of those million-dollar moments! Probably one of the most exciting things I’ve done in living history has been driving reproduction German tanks and working on a functioning German 88 mm artillery piece. It’s incredible to see how powerful those flak guns were and still are!

One of my uncles was a pilot of a B-24, he was wounded by flak from a German 88. Over hostile territory they would use lighters to signal the planes next to them. My uncle had set his lighter on the dashboard of the cockpit, when one round jarred the plane and the lighter fell to the floor. When he bent over to pick the lighter up flak took out the back part of his seat. He got some pieces of flak in his backside. But if he had been leaning back in the seat, it would have killed him.

What do you see as your main accomplishments in life?

My main accomplishments, personally, to be a good son, family member and to be a good friend. Professionally, to preserve the past and a hand it down to the next generation.

How do you think other people see you?

I hope as a history nerd! But more than likely, a little off. The reason I don’t have a problem with the way people see me, is that my parents raised me to not let other people’s opinions bother me or affect me. The most important opinion is your own. Even in high school, I had no problem wearing a kilt or wooden shoes to school. To my friends, I hope they see me as a good friend.

If you had to do one thing over in your life what would that be?

I like the way my life has gone and is going, I don’t think I would do anything over. I don’t have any regrets. There are some things I’m not proud of, but even those events helped me grow.

You wear many hats (and outfits). Why so and tell me about the re-enactors and other organizations you are involved in.

As I mentioned earlier I just seem to have always loved history. I had two different aunts who gave me their husbands’ World War I uniforms when I was in elementary school. Those uniforms led me to wanting to learn and experience more. Mr. Judge Fox introduced me to gun and military shows. He also introduced me to a Civil War artillery reenactment group at the age of 15.

At 18 I went into the real army. I ended up in the 82nd Airborne Division as a paratrooper in the field artillery. For several years after, I pretty much had enough of sleeping on the ground and loud noises. But during an internship with the U.S. Marshals office in Asheville, I met several folks interested in the American Revolution.

So after several months, we started a re-enactment group, the Catawba Militia. In that group we visited Fort Loudoun State Historic Area, a French and Indian War site. Around 1988 I joined the Independent Company of South Carolina garrisoning Fort Loudoun. This group has been kind of the mainstay or the place I always come back to.

In my professional life, I’ve lived in a number of different places; but I always came back to Fort Loudoun. And now I work across the street. I don’t know really why, but I really enjoy the French and Indian War period. Also during college I found the Scottish Tartans Museum in Highlands, North Carolina. I began to volunteer and was influenced by people about Highland folkways and Highland dress. I have Scottish uniforms and outfits that spanned three centuries. My love of history has led to four trips to Scotland, three trips to Nova Scotia, a trip to France to participate in the bicentennial of the French Revolution. Also recently, I went to London with a number of my friends, portraying Lieutenant Henry Timberlake who went to London in 1762 and 1765. He escorted two different groups of Cherokee, and we re-enacted parts of their visit over this past New Year’s.

Over the last 35 years, I’ve been involved in historical events from the 1745 Rebellion (both sides), the French and Indian War (British and Highlander), the American Revolution (both sides), the Regency period (Civilian and Military), The War of 1812 (both sides), the Texas War for Independence (Tennessean in Texas), the Civil War (both sides), World War I (German, Scottish and US), World War II (US, German and British), Korea (US), Vietnam (US) and I’ve even re-enacted when I served in the 82nd Airborne Division in the 1980s. The first step is admitting you have a problem! No problem, it has been fun and educational!

If you chose one thing in your position that is very satisfactory what would that be?

At the museum or at a living history event, what I find very satisfactory is when you see in a young person’s eyes, they get it! You see their eyes light up. When you tell them something they didn’t know or something they didn’t quite understand and it becomes clear for them. It’s a wonderful feeling. I’ve been at several events where we were doing layouts of equipment and we would have veterans come through. It’s an incredible feeling when you put a piece of equipment or let them put on parts of a uniform and you see then revert back to the days of their youth, when they served in the military.

What’s your favorite meal or place to dine?

Boyd’s Jig and Reel in The Old City. It certainly is the best Scottish Pub in the US! Great food, great music, great friends and an incredible atmosphere! And on occasion I have to get my German fix at the Linderhof or the Schulz Brau. Here in Vonore it would be Cielito Lindo Mexican Grill or Pizzeria Venti.

As a good friend. That I did my best to preserve and remember the past and to hand it to the next generation. And that I had fun doing it!