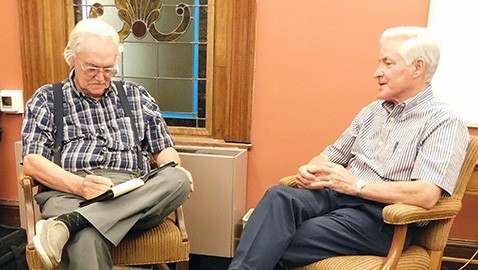 You may know Don Dare as the “6 On Your Side” television reporter or as a WATE Anchor, but there’s much more to Dare than you may know. The Knoxville Focus sat down with him for a chat recently in order for our readers to get to know the man a bit better. What you may not know is that Dare was a tap dancer as a child and, appropriately, was raised in a small Pennsylvania town called “Media.”

Dare is a very involved individual, a local TV star, and an experienced reporter. Asked what he does in his free time he said, “I run, I run in 5K races.”

He said both of his parents were avid newspaper readers. In 1956 he said his mother was chosen out of the audience on a TV show hosted by Ed McMahan and he said, “I decided at 10 years old that’s what I wanted to do.”

“I like to tell positive stories,” Dare said, explaining he likes to warn people of scams, expose people when it can prove crimes, investigate stories, and “be fair.”

Dare’s been with WATE since 1996 after he traveled to a Boy Scout camp in Johnson City. He was, at that time, back in Miami for eleven years and was getting frustrated with changes in that community and was reporting on murders “two and three times a week.” So, he sent tapes out of his experience.

After graduating with a Bachelor of Arts for speech and theater from North Carolina Wesleyan College in 1968, Dare volunteered in the Army and was trained as a combat engineer before attending Infantry Officer Candidate School. He was commissioned as an officer to the Signal Corps. At Fort Gordon, Ga., he became involved in television production. Two years later he was sent to Viet Nam to the Armed Forces Vietnam Network, AFVN, “Good Morning, Vietnam.”  He was first assigned as production manager of visiting USO shows including Bob Hope’s visit on Christmas day. Later he was named news producer for AFVN’s TV news shows, overnight radio anchor, as well as Officer in Charge of the station.

After returning from Vietnam, he obtained a Master of Arts from the University of Georgia.  While at UGA, he was a graduate assistant teaching writing courses and working with the University’s PR Department producing and reporting TV stories for “The Georgia Report.”

Completing his degree, he went on to work in TV news in Nashville, Miami, St. Louis, Los Angeles and back to Miami. Like many reporters Dare moved about the nation for employment.

When he moved to Florida as an investigative and consumer reporter, he began contributing input for his story selections.  Don continued being a self-starter after moving to St. Louis where he began reporting medical stories and long-term projects. His reporting and consumer advocacy have earned Dare multiple national awards and recognition.

Dare began to get frustrated with changes in the Miami community and having to cover murders “two to three times a week” there.

He asked his wife, Lynn, where they had been the happiest over his many years in the media and she said “Tennessee.” He sent out tapes and his resume and was hired by WATE in 1996.

“We loved it and the people so much,” Dare said of Tennessee. The couple had met when both were students at North Carolina Wesleyan College in Rocky Mount. She is a retired Gresham Middle School teacher.

Known in Knoxville now as a supporter of Boy Scouting, Dare said that began because he had been a scout as a youth but didn’t become an Eagle Scout. His son, Brent, has that honor, is a UT graduate and is now the IT manager for Doctor Bob Overholt.

“I got involved with the Scouts in my 40s as a Scoutmaster while working in Florida. In 2007, I helped re-charter and start Pack 55 at Fountain United Methodist Church.  I was the Cubmaster, also a Den Leader, and later Scoutmaster of Troop 55. Four of the six members of my first cub den went on to become Eagle Scouts.” Dare has assisted scouts putting together TV stories at various jamborees including national and international events.

When asked if he has any regrets, Dare said “I would like to have been kinder to people with what I’ve said to them.”

“As someone who cares for people. We’ve tried to give a voice to people who don’t have a voice,” he said.