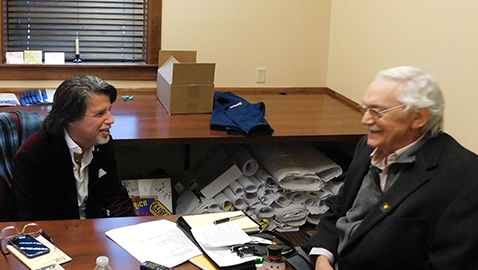 He’s one of those people you’ll see at almost every event or benefit and I’ve never seen him without a smile on his face.

George Bove is the business development manager for BESCO on Central Ave where he develops new markets and participates in community relations. You may know him better as a Master Mason, Shriner, community volunteer or as president of the North Knoxville Business and Professional Association.

His enthusiasm is contagious and he and his wife, Janet (also known as Sparky because George is an electrician by trade) often volunteer together for United Way and Salvation Army events.

The Knoxville Focus sat down with George Bove for about an hour recently so you, our readers, can get to know the man beyond his public life. He’s the author of two published books. One of the books is the children’s book, “the little orange t,” which is very popular and is stocked at local book stores and the University of Tennessee.

Tell us a little about your neighborhood involvement.

My neighborhood involvement comes from having a heart for charity. True success is never measured in dollars or titles but from how much we help others, period. There’s nothing that can convince me otherwise. Getting involved is the right thing to do and working at BESCO allows me to do just that, helping others. The folk we serve are the very people we go to church with, people we see in the grocery store or at the gas pump. These are our friends and neighbors. I got involved with the Masonic Order, Cherokee Lodge, and with Kerbela Shrine as a total life member to help seal my commitment to serve.

In community involvement my amazing wife participates too, she jumps right in and loves it. This past weekend Janet and I served hot chocolate at the Salvation Army booth during the downtown tree lighting.

How did you end up in Knoxville?

In 1988 I was blessed to move here from the small town of Troy, New York. That’s 30 years now. I had no kids and no other family members in the state until I married my wife. No other family members in a state that touches the great state of Tennessee. So, Knoxville became my family. I will be buried here in East Tennessee, this is my home. I have also been blessed with a good trade in the electrical industry and have always made a good living.

Do you think that Knox County and Knoxville will ever form a metro-type government?

There are so many new faces here and I think some folk see things as heavy duplicity in some of our government services. I say without hesitation that the individual services are still good, even to the point of excellent. We have an amazing police chief and an amazing sheriff. When you look at a comparison city our size or a county our size we really have the numbers down on crime, and you feel safe.

What is your main interest or hobby in your private life?

I came up as a musician and play in a worship band in my church. If I am doing anything, it is playing a six string or bass guitar. I still have my first guitar. My dad bought it for me when I was eight years old and gave it to me for Christmas. It’s a Les Paul but not a Gibson Les Paul, it’s a Hondo. Dad, a truck driver with five kids, couldn’t afford a Gibson. I played all over Knoxville way back when. I helped Kevin Nicely at the old Mercury Theatre, now the Preservation Pub, and a place in the Old City called Neptune’s.

How did you become involved in the community?

Once I became a leader in the union (International Brotherhood of Electrical Workers and the American Federation of Labor and Congress of Industrial Organization), I became more involved in the community in a positive way. That’s when the politics came in. Politically, I am a solid moderate, liberal on some things and conservative on other things.

What do you see as your main accomplishments in life?

When I realized that patience and charity are the most important things in life. Some time ago, I decided to rename my feet, one was patience and the other charity. No more need for fancy words. Now, I can walk as a Christian and not have to say a single syllable if every step is a step of patience and charity.

When someone meets you for the first time or starts to get to know you, what do you think they think about you?

They think, George is having a good time!  I’m not an optimist or a pessimist; I’m what I like to call a “Joyfullist.” It doesn’t matter to me if the cup is half empty or half full, I’m just glad I have a cup. Joy, when shared, people react in kind, don’t they?

What do you like the most about your position at BESCO?

What I like about BESCO is it’s family. No matter what happens here they celebrate the wins and anything that could be considered a loss is just an ability to grow. It is so cool. There are no pure losses, just opportunities to learn and develop. I love it, they invest in their people. It’s so amazing. You’re not a cog or a number, you’re a person. Majority of the leadership has served an electrical construction apprenticeship and worked out in the field.

What’s your favorite meal or place to eat?

My favorite place to eat is at my wife’s table. She cooks all the time and when she is not, she’s watching those cooking shows. My favorite meal that my wife fixes is what we call the “crab bomb.” She fries Maryland crab meat with butter.

How do you want to be remembered?

As one of the best guys I ever met. A man who truly had a life well lived. I want a large room full of people crying so hard because to me that means I really, really affected them.