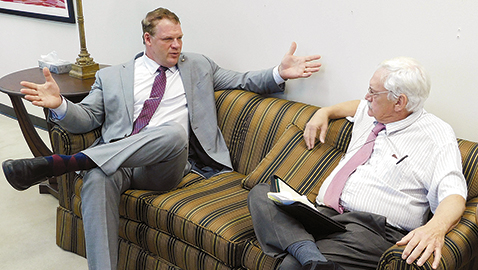 The Knoxville Focus is sitting down with several city and county officials, residents and community leaders for a series of casual chats that will, hopefully, let you get to know them on a personal level.

Our first chat was with Knox County Mayor Glenn Jacobs.

You’ve been mayor for several weeks now. How is it going for you?

I’ve had a good time, met so many wonderful people. We’re trying to get out there but also we’re looking at policy and things we’re trying to accomplish. We’ve incorporated a couple of thing here I’m proud of.  We’re going to have an employee of the month for the county, a newsletter for the employees.

Of his weekly Facebook report to citizens Jacobs said, “I believe in transparency and people knowing we’re out there doing stuff. A few weeks ago Commissioner (Larsen) Jay put together a picnic for all the elected officials and I said I’d bring banana pudding. My wife was busy so I had to make the banana pudding. It was excellent and everybody enjoyed it.”

How is being mayor affecting your family and business?

I’ve stepped out of my business. My son-in-law runs it and it is in good hands. My wife is busy; she has a real estate business now. I wish we saw each other more, I’m busy and she’s busy. We were at the Salvation Army recently and we actually both were sponsors of that event, and this allows us to do things like that.

Tell me a little bit about your family.

My wife, Crystal, is actually the reason we live in East Tennessee. We’ve been married for 23 years. Her stepmom owned Cowboy’s On The Water in Dandridge. I have two daughters I’m very proud of and they are both nurses. One just became a nurse practitioner and the other has her MBA in healthcare administration.  We have two grandkids, a granddaughter and grandson.

What are your hopes for the county or working with the city?

When I look at where we are and what we have economically I think that Knox County can become a global player in research and development with ORNL and Y-12 and with the things going on at UT. We can take advantage of that to attract firms in that sector of the economy. One thing we don’t have is a huge swath of flat land that you could build big industrial applications on. But I think that if we look at things on a smaller footprint we could certainly do that.

We can have some really great opportunities for everyone over the next decade.

Do you have time for hobbies?

Not really. The animals are probably our biggest hobby. We have about nine dogs. When we lived in Jefferson County we had a farm and people kept dropping off dogs, we didn’t have the heart to take them to the pound. We would bring them in and take care of them.

What do you see as the main accomplishment in your life?

Hopefully that’s mostly ahead of me. I think that every day we are growing as human beings or going the other way. I’ve very proud of my daughters. In the end parents can only do so much. I’m proud of some of the community involvement we’ve done as well. I’m not very introspective.

When people meet you the first time how do they see you?

Some people see me as the wrestler on TV. That’s good and bad because sometimes you have to overcome the stereotype. I hope that after they talk to me a few minutes they realize I’m just a regular person. I also realize that I’m a big guy and my wife tells me I probably intimidate people without trying to because of my size, so I’m always cognizant of that.

Do you think that, in the future, we will have a city-county metro type government? There are so many duties that are already shared by both governments.

I don’t know, that would be up to voters. My perfect plan  is that we would have a consolidated government but different services. Your urban center, etc., but nothing would change except for some services. The debt structures are different, the pension are different. I live in the county and you’ve have to convince me my taxes are not going to go up. As long as we could save money overall, wonderful, but if we can’t than I wouldn’t be for it.

Have you looked into an eventual county-wide fire department?

Right now we haven’t, it would be extremely expensive. I know those discussions are going on.

What’s the one thing in your position as mayor is the most satisfying?

What’s your favorite meal or place to dine?

Actually my favorite meal is hamburgers and French fries. I was talking to someone from out of town and they asked me where they should eat and I think I named about twenty hamburger places. I can’t pick one of them, there’s a lot. Knoxville is a “foodie” town. The Inskip Grill has a pretty killer burger and Litton’s has Thunder Road burgers.