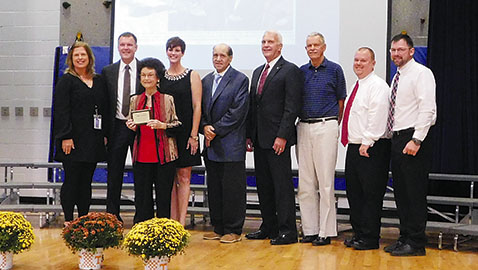 The Gibbs Elementary School gymnasium has a new name. It was dedicated and named in honor of the late Larry Graham, a longtime teacher and coach who taught physical education and match in the Knox County School system for four decades.

Graham spent 27 years of his career at Gibbs Elementary and in the Corryton Community, where he touched many lives.

The school officially dedicated the gym in Graham’s honor in a highly attended ceremony on Monday, Oct. 21, where he was remembered as a family man, a mentor, a teacher, a coach and a friend. Among those in attendance were Knox County Commissioner Richie Beeler, and school board members Mike McMillan and Patti Bounds. The school’s fourth grade chorus sang a few of Larry’s favorite songs, including “Rocky Top” and “Tennessee Waltz.”

Among those who spoke were Gibbs Elementary School principal Joe Cameron, physical education teacher Susan Hibbett (who was one of his students), Knox County Schools Superintendent Bob Thomas, longtime friend Jerry Tipton, Jerry’s son Preston (who was also one of Graham’s students) and Graham’s son, Kendall (who was accompanied on stage by Graham’s daughter, Kimberly Muller).

But his impact on his friends, family, former students and colleagues remains.

Jerry Tipton recalled his first encounter with Graham when both were students at Tennessee Wesleyan College in Athens.

“The year was 1961 and I had just been through the worst four years of my life as a student at Holston High School and my mom told me that I was going to go to Tennessee Wesleyan in Athens,” Jerry said. “So she packed up the car and we drove to Athens, I didn’t even know where it was and when we got there, she let me out of the car and gave me my suitcase and said goodbye.”

Jerry remembers not knowing anyone but he went to orientation and afterwards stopped at the school’s gym where the basketball team was working out.

One of the players was Graham, a senior player at the school.

“I went to the gym after orientation and I saw Larry Graham. Here is this Karns High legend coming for me,” Jerry said.

The two talked and Graham told Jerry that he would see him in two days. Jerry became the manager of the basketball team and the two were friends for the rest of Graham’s life.

After college Graham and the elder Tipton reunited in Gibbs where Graham was a softball umpire and Jerry was a player.

Jerry’s son, Preston, went to Gibbs Elementary School as an 8-year old student and he remembered his teacher as a caring person who just wanted everyone to do his or her best and noted that Graham was one of those people who you always wanted to see.

“I remember that Mr. Graham always drove this big blue Gibbs-colored truck and I was always looking for that truck,” Preston said. “You always wanted to see Mr. Graham and you were disappointed when he wasn’t there in his class.

“People always looked forward to having substitutes, but not a substitute for Mr. Graham. He cared about you as a person, and not just about your education.”

Hibbett was also one of Graham’s students. They would later work together. She had glowing memories of the man.

“He was a wonderful listener and he always gave you 110 percent of his attention,” Hibbett said.

Kendall Graham remembered his father as a Godly man and a servant leader.

“He loved the community and he just wanted everyone to do their best and we’re honored to be his family,” he said.

Graham’s widow received a plaque. She works for the school district.