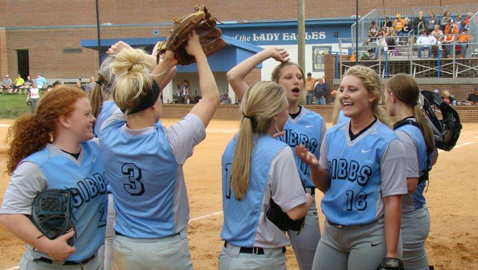 Gibbs High’s softball team got down to business last week in a rematch with Powell.

The host Lady Eagles turned in a complete game to post a 3-0 win Wednesday and moved back into a tie for first place in the District 3-AAA regular season standings as far as the loss column is concerned.

The Lady Panthers had handed Gibbs a 5-4 loss in nine innings the week before at Powell.

“Very business like,” said Gibbs head coach Carol Mitchell, describing her team’s play in the second meeting. “We pitched well. We played well defensively. Offensively, we put the ball in play and scored some runs.”

“That’s the way you’re supposed to do it,” summed up Mitchell.

Senior pitcher Abby Hicks allowed only two base runners in the game, inducing 12 groundouts and striking out four.

At the plate, Gibbs got seven of its eight hits off freshman standout Allison Farr, who was relieved by Chelsey Fortner in the fifth inning.

The Lady Eagles struck early. Wheeler tripled over the Powell right fielder’s head in the first inning and scored on Hucklebee’s single into shallow right field.

Gibbs increased its lead to 2-0 in the third when Sohm led off with an infield hit, took second on a fielder’s choice and raced home when the Powell infield couldn’t secure Kayley Kern’s spinning single to second.

The Lady Eagles manufactured their third run in the fourth as Morgan Overholser drew a base on balls, Hicks singled, Sarah McFarland moved up the runners with a sacrifice bunt and Ashley Daniels singled Overholser home.

Powell, which had four players out with injuries, managed only two singles.

The Lady Panthers’ only threat came in the third. Karsten Miller singled, was sacrificed to second and got to third on a wild pitch. But she was stranded there when Hicks got a batter looking at strike three.

Powell’s only other hit came with two outs in the seventh when Lexi Jones singled but was tagged out in a rundown between first and second.

“We came out ready as a team and we played together as a team,” said McFarland, who is in her third season as Gibbs’ starting catcher. “We all did our jobs and contributed and it just feels really good to get the win.”

“She pitched really good today. She was hitting her spots. Her change-up was working really good and she was placing it just where they couldn’t get it.”

“It’s no excuse. We’ve had some injuries and had to put some people in there. They’ve got to step up and fill the role.

“Hopefully, we’ll get one back next week and hopefully we can get a couple more back before we get to the tournament.”

“They played really well,” he said. “Abby threw a great game. They came out fired up ready to play. Very good team.”

GIBBS IMPROVED to 20-7-1 overall and 9-1 in District 3-AAA after defeating Halls 4-0 Thursday. The Lady Eagles broke a scoreless tie with three runs in the fifth inning.

Hicks struck out seven as she logged another shutout. Wheeler had a RBI double and triple to lead the Gibbs attack.

Kern and Overholser had RBI singles in the big fifth inning.

Powell, meanwhile, swept a doubleheader from Campbell County to raise its record to 23-3 and 12-1 in district play.