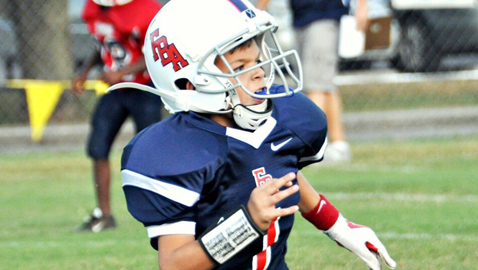 Gibbs’ 14-under Varsity team got on a roll in the Knox Metro Youth Football League’s post-season tournament and captured the NFC division championship despite being seeded No. 6 out of seven teams.

After going 1-5-1in the regular season, the Eagles won four games in 10 days, capping their remarkable tourney run with a 20-6 victory over top-seeded Bearden on Nov. 10 at John Tarleton Park.

Gibbs had defeated the EKAA Runners in the last game of the regular season after tying West a couple of games before then.

“That gave my players a lot of confidence,” said Coach Johnny Brewton.

“I credit the late season charge to our players,” said Brewton. “We made changes on offense, going with a more power set with a wishbone look. Our offensive line play got a lot better also with the new look, but I have to give most of the credit to our defense going from a 3-5 to a 4-4. Down the stretch the defense played lights out.”

The players bought in to the changes and earned their first championship.

“This team has made it to the playoffs every year since they were 8 years old only to fall short, but something happened to this team that coaching could not provide. They started to believe in themselves. They got confidence.

“In the closing minutes of the championship game, all I could do was sit back and watch—watch a team that I had coached for years. Knowing that this was the last year with this team and they were finally going to win the championship. I was excited for a group of players that I have been able to develop a long lasting friendship with. I was proud of them and they were so excited to finally win it.”

The changes on offense enabled Gibbs to control the ball more.

“The biggest and probably the most important thing was the play of our defense,” said Brewton. “They played great against a very good offense. Defense is what won us the championship.”

Brewton is one of the longtime coaches on the Knoxville youth football scene. He played tailback and strong safety at West High and was a senior in the fall of 1981. He wanted to play college ball and had some offers but decided to give it up.

Twenty-seven years ago, he got a phone call from Bill Wilson, his high school coach.

“He said he wanted me to coach his 14-under team that he was putting together,” recalled Brewton. “I had never coached anything in my life, but he believed in me. He believed in me enough to tell me I was going to coach. ‘No’ was not acceptable.

“I look back over the years. The enjoyment that I have gotten from coaching is priceless. Many days I’ll be out and hear someone yell, ‘Hey Coach.’ It’s great to see players that you had a part in their lives and look how they have grown into great young men.”