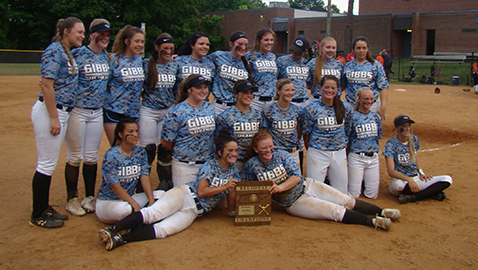 Mitchell’s Lady Eagles pounded out 13 hits in a 12-1 five-inning victory over Kingston Wednesday night before a packed house in Corryton.

“I thought we hit the ball well and we were able to keep pressure on them all night,” Mitchell said after watching her squad score in each of its four at-bats against the Lady Jackets. “Tonight, we did a good job getting into our offense.”

Moreover, every starter that hit for Gibbs (37-8) reached base at least once. Eight of the starters in the lineup got hits and pinch hitter Breanna Baumgardner singled before being lifted for pinch runner Jade Mullins scored.

And that was only part of the story for the Lady Eagles, who were re-classified to Class AA after winning the 2017 Class AAA State Championship with a victory over former District 3-AAA rival Powell in Murfreesboro.

Gibbs pitcher Rayna Pendleton had a no-hitter through 4 1/3 innings before Kingston scored a run and had four hits in the top of the fifth.

Pendleton, the Gibbs ace, retired eight consecutive hitters after she plunked Lady Jackets’ starting pitcher Emily workman with one out in the top of the second inning.

“I think she got a little tired,” Mitchell said of Pendleton, who had one strikeout and no walks in the contest.

Mitchell also said that the Lady Eagles struggled in their region semifinal victory over Alcoa on Monday, May 14.

There were no such struggles against Kingston as five Gibbs players had at least two hits.

Leadoff hitter Sierra Hucklebee went 3-for-3 with three runs and a three-run homer.

The Lady Eagles blew things open with five runs in their half of second. Wheeler and Kayley Kern each had two-run doubles in the frame. Hughes also knocked in a run with an extra-base hit to help Gibbs open a 7-0 advantage.

Hucklebee’s round-tripper made it 9-0 in the third before Gibbs added three more runs in the fourth.

The Lady Jackets got their run when Workman doubled and came home on an infield hit by Trinity Clements.

The Lady Eagles were set to host a state sectional elimination game Friday but results were unavailable at press time.