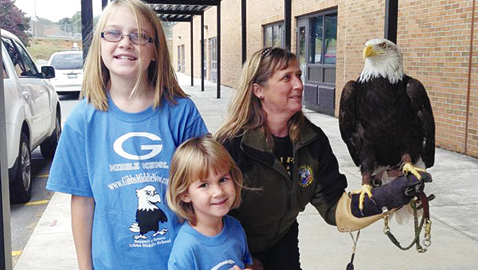 On Thursday night at Halls Elementary School, students, teachers, parents, and other members of the community came together at a public insight forum to discuss the progress of the Knox County Schools’ five-year strategic plan and ideas for the next five-year strategic plan. The Knox County Schools Strategic Plan to improve Knox County schools began in 2009. Dr. Jim McIntyre, Knox County Schools Superintendent, highlighted areas that had improved, mentioned areas that still needed progress, and asked for input from the community at the beginning of the program for the next five-year plan called Knox County 2020. Following his remarks, the public broke off into small groups, discussing what is good, what is not good, and what is next. The community members came back at the end of the program to talk about what they had discussed.

Dr. McIntyre started the evening by addressing the crowd in the gym and highlighting how the five-year strategic plan had improved the schools and what changes are needed for the next five years. There were four main goals from the 2009 plan: focus on the students, effective educators, engaged parents and communities, and infrastructure to enable student learning. One of the things McIntyre said had been a focus for the goal of effective educators was to have great school principals and leaders for the future. Tied to that, was a developmental education program installed for teachers.

McIntyre also said in his comments that the schools have seen steady, academic progress. 79.2 percent of high school students graduated in 2008; in 2012, it was 90.6 percent.

McIntyre said that three main themes have emerged to date from the Insight sessions. “Personalized learning has been one thing to emerge, making sure we meet the individual learning needs of each and everyone of our students,” McIntyre said.

“Facilities and capital investments has been another emphasis, the interest that we have a safe, healthy, and inviting learning environment for all of our kids,” he said.

“Third, investing in our people, recognizing that we have truly outstanding teachers and principals in our schools,” he stressed.

McIntyre emphasized the need for these sessions: “I think it’s important we hear from our community, Getting those many voices engaged is really important.”

After McIntyre’s comments to the public in the gym, attendees broke off into small groups in classrooms to discuss what is good about the five-year strategic plan, what is not good, and what is next. Highlights of the good were faculty, the students, and the Common Core program, which is designed to make sure every student graduates high school prepared for college or the workplace. Tennessee is one of 45 states that have adopted the Common Core standards and has implemented it.

On the “what is not good” front, people mentioned the absence of a Gibbs Middle School since 1991. Another concern mentioned was the lack of support for regular education students struggling with a particular area.

For the question of what is next, group facilitators asked for a consensus from the group as to three goals of what they would like to see happen in the next five years as part of the Knox Schools 2020 Strategic Plan. The number one desire the group would like to see is a Gibbs Middle School. This was also the top priority of the public at the end of the insight program session.

“To have less paperwork would benefit my students better, and I would feel I would do more teaching,” Hawkey said. “Teachers are doing less and less teaching and more and more paperwork; that affects my morale.”

The third goal the group chose to put of what they would like to see next, is expanding the career preparation opportunities for those students who choose not to go to a traditional college after graduation. Hawkey, as a CTE teacher, said this was his main reason for coming to the Insight Sessions. “I want to make sure CTE gets voiced and heard,” Hawkey said. “There are a lot of issues across the board. I don’t feel like CTE has been mentioned. The focus has been on colleges and universities and AP classes and less and less on CTE. There’s contractors out there looking for workers and we’re not supplying it to them,” he emphasized.

At the end of the session, where groups came back together and mentioned their ideas for the next five-year strategic plan, building a Gibbs Middle School was the number one priority for all of the groups. Dr. McIntyre responded to this when asked about it after the session was over. “I’m open to hearing a variety of perspectives and insights,” he said. “We want to make that we’re listening and giving every idea consideration.”