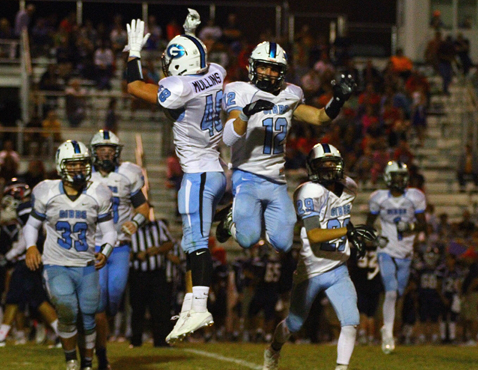 Gibbs’ magic number is one.

Either a West loss at Heritage this week or a Gibbs win at West in the final week of the regular season will give the Eagles the outright Region 2-5A football championship.

Gibbs clinched at least a tie for the title with a 28-7 win at South-Doyle Friday night.

West, which has lost three of its past four games and was shut out 20-0 by Farragut last week, still could earn a share of the region title and the tie-breaker for the No. 1 seed if it sweeps Heritage and Gibbs.

Coach Brad Conley’s Eagles, however, are on a roll, having won five of their past six games and have this week off to rest up for what they hope will be a strong finish.

“I think the most important thing for Gibbs football right now is Week 9 (this week),” said Conley. “We’ve been through a gauntlet of eight straight weeks of football. The kids have put themselves in a great position. The first thing we are going to do is enjoy a week off.”

Gibbs, 5-3 overall and a perfect 4-0 in the region, beat South-Doyle (4-4, 2-2) with a strong running game, a trick play and a defense that bent a little but was pretty stubborn for the most part.

Quarterback H.T. Fortner and Dalton Rodgers, a 5-11, 235-pound running back, combined for close to 200 yards rushing and one touchdown apiece. In between, Noel Leyva scored on a 5-yard run and a wide open Javay Williams hauled in a 59-yard scoring pass from Tanner Rhodes, who had pulled up on a tricky reverse.

End Eli Mikos made the most productive defensive play for the Eagles as his interception return to the South-Doyle 30 late in the third quarter set up Gibbs’ final TD.

“We went to work and we grinded tonight,” said Ollie Lane, the Eagles’ 6-6, 285-pound junior right guard who has offers from Missouri and Vanderbilt. “I’ve got to give a lot of credit to our quarterback. J.T. made a lot of plays and Dalton refused to go down. We all just kind of fought it out. In the end it’s who is tougher and I think we were tougher at the end.”

“When you’re a running football team like we are the offensive line is going to be the key to success offensively,” said Coach Conley.

South-Doyle was without sophomore standout Ton’Quez Ball, one of its top offensive weapons who suffered a broken collar bone in Week 7. The Cherokees avoided being shut out when Kent’ta Tanner scored on a 15-yard run up the middle with 8:43 remaining in the game. Austin Shuler’s kickoff return plus a personal foul on Gibbs had set up the Cherokees’ scoring possession at the 45.

The first quarter was scoreless as the two teams traded punts and Gibbs lost a fumble to Dylan Cameron at the S-D 33.

Good gains by Tanner and freshman Elijah Young moved the Cherokees to the Gibbs 38 early in the second quarter, but South-Doyle lost 16 yards when a snap sailed over the head of quarterback Caleb Wender.

Tanner got 17 of those yards back and on fourth-and-nine at the Gibbs 37, South-Doyle faked a punt, but A.J. Nunn’s pass fell incomplete.

Gibbs got rolling with a 17-play, 63-yard, seven-minute drive that Fortner finished off with a keeper from the 1. Gabe Martin’s kick made it 7-0 with 4:07 on the second quarter clock.

The Eagles forced a punt and got the ball back with 2:20 to go. A 27-yard run to the S-D 30 on first down by Fortner gave the Cherokees a chance for more points. Fortner gained another 15 yards on a bootleg. Leyva stretched the ball across the goal line with 28.4 seconds to spare.

Wender passed 14 and 19 yards to Young to quickly move the Cherokees to the Gibbs 38 with 6.1 seconds on the clock. Could it be time for a Hail Mary? Time and yard line sound familiar? Wender loaded up and threw it in the end zone for Gus McAnally. But Williams knocked it down.

Conley showed confidence in his offensive line when he went for it on fourth-and-one from the Gibbs 40 with the Eagles leading 14-0 midway through the third quarter. Fortner sneaked for the first down.

“Nothing says confidence like going for it on those fourth down situations,” said Conley.

“We weren’t productive on offense like we needed to be,” said South-Doyle Coach Clark Duncan. “They drive, eat the clock up and score. We’ve got to answer it and we didn’t.

“Gibbs had something to do with that, but we’re better than that. We’ve managed to score a lot of points over the past few weeks. It’s disappointing that we didn’t do it tonight.”