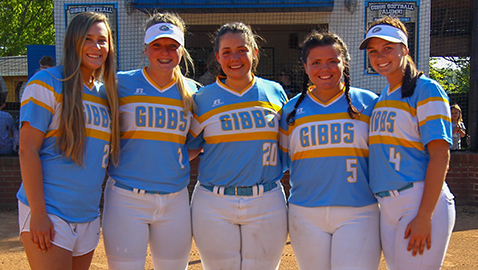 Rayna Pendleton and four teammates reflected on years of playing softball together at Gibbs High’s Senior Night Wednesday and then turned their attention to defeating rival Halls and getting ready for this year’s post-season tournament play.

“It is bittersweet,” said Pendleton of the emotional occasion. “Part of me feels like I’ve been waiting on it, and another part is like where did the time go?

“We just said that we loved each other and we’ve had a good ride, and that we’re sad to leave each other, because none of us are going to the same college.”

They played all four years in high school and are “super close,” added the Lady Eagles pitcher.

Changing the subject, the Lady Eagles still have business to do.

“We do,” concurred Pendleton, who hurled Gibbs to an 8-3 win over Halls and helped her own cause with three singles and three runs batted in.

The victory upped Gibbs’ record to 35-8 going into Thursday’s game at Kingston. The Lady Eagles are scheduled to host Powell today (April 29) at 5:30.

Halls, which has clinched at least a share of the District 3-AAA regular season title, took a 21-6 overall record into Thursday’s game at Grace Christian Academy and will entertain Union County tonight at 6.

As perennial state power Gibbs gets ready to go after an 11th TSSAA championship, Pendleton said she has started feeling better about her team’s chances.

“I think these past few weeks we’ve really pulled it together and we have a good fighting chance at winning,” said the Walters State signee. “I’m pretty confident that we’ll take home the title.

The five Gibbs seniors played their first two years in Class AAA and this is their second season in Class AA.

“I think we have to work together to be strong,” summed up Pendleton. “Once we all get on the same page, I think we’re unbeatable.”

The Lady Eagles got 14 hits off freshman pitcher Aspen Callaway, who also gave up six bases on balls before being pulled after 4 1/3 innings. Junior Cassie Norris finished.

Halls’ No. 1 pitcher Bri Blair has been held out of non-district games since suffering a hip injury early in the season.

The Lady Red Devils took the lead in the top of the third inning on Norris’ 3-run homer that just got over the fence in left center.

Callaway couldn’t hold the lead, giving up a leadoff single to Shelby Blake and then three straight walks as Gibbs tied the score.

The Lady Eagles added three more runs in the fourth, with Bailey Reagan’s single plating one run and Pendleton’s bases-loaded single down the right field line bringing in two.

Blake finished with three singles, scored two runs and stole a base. Huff and Reagan chipped in two hits each.

Norris also had a double off Pendleton, who gave up seven hits and one walk and hit three batters, while striking out four.

MACEY HUGHES: Gibbs’ standout junior centerfielder and first baseman was lost for the remainder of the season when she suffered a broken ankle sliding into second base in a tournament at Murfreesboro in March.

RECOGNITION: Carol Mitchell will be presented a plaque at tonight’s game to commemorate her recent “900th win” as Gibbs’ head coach.