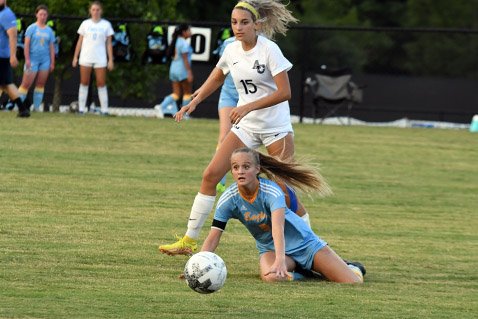 Every high school sports team and every coach always faces tough road games during a season.

That’s just a part of a grueling challenge that is a sports campaign.

But the Gibbs High School girls soccer team will not play a true home game in 2022 as Ernest Whited Stadium was recently demolished and the reconstruction is incomplete and remains behind schedule.

While Gibbs is without a home, it will play its home games at Central High’s Dan Y. Boring Stadium or at Tommy Schumpert Park.

Like Gibbs and all other Knox County Schools, Central has a turf field. The field at Schumpert Park, however, is natural grass, and that provides its own set of challenges, especially for a team that prefers playing at a fast pace.

“The field at Central is turf like ours, and that allows us to play fast, but look at this,” French said pointing at the natural grass playing surface at the park run by Knox County Parks and Recreation. “This is like carpet.”

French, since taking the reins of the Gibbs girls soccer program, has transformed the Lady Eagles into a top program that has aspirations of making the Class AA State Tournament every year.

They made it to the big stage for the first time in 2021, but they’ve won five consecutive district tournament championships. Gibbs has also won region titles and made sectional appearances in recent years.

The Lady Eagles, who hold a 4-1 record in 2022, suffering their only loss to Webb School of Knoxville, 1-0, have set the bar high.

And French said they have high hopes for the season.

“We want to win another district championship and we want to have a say in who wins the region,” French said.

But not having a true home might make that a bit more difficult.

“It’s tough when you have to get on a bus to go to every game,” French said. “Everybody likes to play at home.

“When you play at home, the kids can go home after school, relax and have a snack and then come back and get ready to play.”

Gibbs may not have that luxury this season, but the Lady Eagles do get the opportunity to play, which no team takes for granted these days.