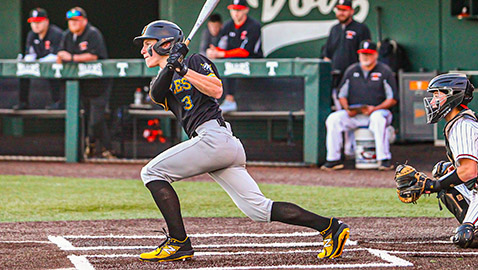 Gibbs High’s baseball program picked up where it left off at the end of the 2021 season as the Eagles notched a 2-1 win over rival Pigeon Forge this year.

At the Spring Fling in Murfreesboro last May, Gibbs defeated the Tigers 14-8 for the TSSAA Class AA state championship.

What made this 2022 opening day game a little special too is it was played at UT’s Lindsey Nelson Stadium.

The Eagles “did it again” by defeating pitcher Dylan Loy (a UT commit) and other D1 commits, said Gibbs Coach Geff Davis. “It was a good win with five sophomores in our starting lineup.”

Dylan Ford, a junior, pitched five strong innings for the Eagles and junior Braden Graves picked up the save plus had the game-winning RBI.

Gibbs is led by All-State players Reilly Byers and Graves this season, said Coach Davis. Byers is a junior southpaw pitcher and outfielder.

“Yes, there will be growing pains this year (with several young players on the team),” said Davis. “But with a mix of seniors and juniors, the Eagles hope to be flying high again by mid-April.”

Gibbs and Pigeon Forge, coached by Mike Guinn, have been playing each other regularly over the past 15 years, with the upper hand going “back and forth,” said Davis. “It’s been a fun rivalry.”

With the new classification this year – Gibbs in Class 3A and Pigeon Forge in Class 2A – and the teams not in the same district, Davis said it feels like the game has lost a little of its significance.

“It was a fierce rivalry for several years,” he said.

The two teams are not scheduled to play again this season.