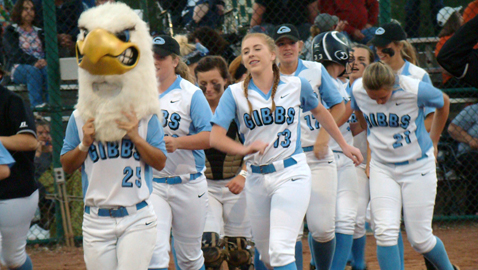 MURFREESBORO – Her team had played so well and hit the ball so hard in beating Powell 6-2 in the winners’ bracket finals Thursday, the hardest thing Gibbs High softball head coach Carol Mitchell had to do was get breakfast plans worked out for the following morning.

“The funny part about that is, if we lose tonight, we play so early in the morning that breakfast is something quick,” said Mitchell. “By winning, we don’t play until 3 o’clock in the afternoon, so we have time for a big, nice breakfast.”

“We’re not near one, but we want something nice to come to us, so we’re going to work on that.”

It all worked out – breakfast Friday morning followed by a 7-5 win over Powell that afternoon – as Gibbs (43-9-1) rolled through the Class AAA state tournament unbeaten for its 10th state title.

The way the Lady Eagles were hitting the ball in the winners’ bracket finals, Coach Mitchell was asked what she had fed her girls that morning.

That afternoon freshman Macey Hughes continued her power display with a two-run homer over the left field fence that gave Gibbs a 4-2 lead in the top of the fifth inning. Junior Kayley Kern added a solo shot in the sixth.

Even the Lady Eagles’ outs were hit hard.

“We gained a lot of confidence when we beat their team with her (sophomore Allison Farr) pitching in the district tournament,” said Mitchell. “Something clicked that night when we played them in the winners’ bracket finals of the district, and ever since then, we’ve been able to have some success hitting the ball against her. She’s a really good pitcher. But we did. We hit the ball hard tonight.”

The freshman Hughes had two home runs Wednesday – one in the sixth inning and then came back in the seventh and hit the grand slam to beat Ooltewah 7-3 in the winners’ bracket semifinals.

Gibbs, perennial state power, was making its 31st state appearance. But when post-season play began, Mitchell had doubts about this team.

“We just weren’t playing together,” pointed out Mitchell, looking back. “It was a lot about ‘me, me, me’ and not so much about the team. We had a good record, but it just wasn’t consistent. We had a little motivational get-together before the district tournament and the girls have responded with positive …”

It was suggested Mitchell get those girls to whip up another breakfast Friday morning.

But as it turned out, Coach Mitchell and her daughter did the cooking.

“Along with scrambled eggs that me and my daughter, Elizabeth, made, we had muffins, leftover sausage biscuits and pancakes, and Eggo waffles,” said Mitchell.

Powell defeated Henry County in the losers’ bracket finals Friday morning to get another shot at Gibbs. It would be the seventh time the two Knox County teams had played each other this season. Each had won three times.

“We knew Powell would be on an adrenaline high,” said Mitchell. “If we could just keep their rallies to a minimum, we knew we could win.  Since the regular season, we have gained tremendous confidence in our hitting.  We felt like we could score runs.”

The Lady Panthers, down 7-1, rallied for four runs in the seventh inning to make it close.