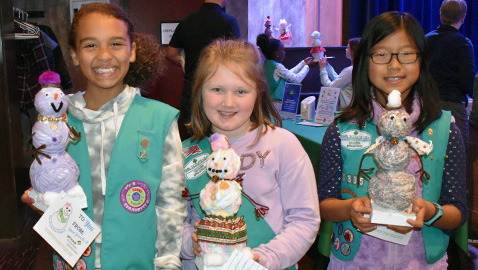 The hustle and bustle of Market Square on Nov. 9th was full of Christmas shoppers, football fans, and farmer’s market patrons, but among the downtown crowds was a room full of Girls Scouts hoping to make someone else’s holiday season a little brighter. As part of the first ever Snowman Project presented by the Girl Scouts of the Southern Appalachians, girls from kindergarten through twelfth grades took time out to make snowmen for the patients of East Tennessee Children’s Hospital.

These girls were creating not snowmen who melt but instead those made of yarn, Styrofoam, fabric, buttons, and ribbon. Four hours were made available for girls to gather in the Square Room thanks to its donation and the support of sponsors from Dunkin Donuts, A & W Office Supply, Target One Marketing Group, Home Depot Maryville, Loopville, and The Yarn Haven which made the outcome a success!

The GSCSA invited all the Girl Scout troops and the community to join them. All participants supported the East Tennessee Children’s Hospital and the Girl Scout programing in the Knoxville area. Participating Girl Scouts came in uniform and enjoyed getting creative making snowmen, snowwomen, snow reindeers and more while eating refreshments and socializing with one another. Each snowman creation was tagged with a handwritten “Get Well” message by its Girl Scout maker.

Several high school students, such as sophomore Carolyne McCord of Troop 21156, worked a two-hour shift to receive the Girl Scout Snowman Badge, an extra-curricular badge. McCord, who worked at the yarn table, began her Girl Scout career as a Daisy in kindergarten. She explained, “It’s good for resume building, scholarships, and to keep up relationships with the people I’ve made with friends who don’t attend my high school.”

McCord has completed the Bronze and Silver Awards and is working toward the Gold Award. “The project ‘Take a book, Leave a book’ was my favorite. I did it with a friend to complete the Silver Award,” she added. She described it as an endeavor to encourage others to read more and recycle by providing a book stand in her neighborhood.

“Girl Scouting builds girls of courage, confidence, and character who make the world a better place. We are trying to instill community service and empower the girls through projects like this one,” commented GSCSA Vice President of Philanthropy Elizabeth Kramer.

Since it’s not always possible to serve the community with children, Girl Scouts opens those doors of opportunity to do so.

“Girl Scouts is a great way to get your kids involved in serving others and I get to experience it with them. We’ve helped Care Cuts, and KARM … and when I ask the girls what they want to do for the year, it’s community service,” said Girl Scout leader and mother Lena Fry-McClunie.

Other responses from the girls when asked what they enjoy most were “to make the world a better place,” “to do fun stuff,” and “you get to try a lot of new things.” One of those new things, as explained by GSCSA Graphic Designer & Digital Content Coordinator Melanie Winton, was the creation of a rap song of the Girl Scout Promise and Law by two girls as part of an outreach program at the YWCA Phyllis Wheatley Center in Knoxville. Shermija and Desjhae from Troop No. 30024 wrote the lyrics and, with help from Winton and her brother, produced a music video.

“This is why I do what I do,” said Winton referring to the snowman and music video projects. “Completing the video made them feel amazing, they have dreams too,” she added.

The Girl Scout organization’s slogan “Skills Today, Success Tomorrow” rings true for many women who connected with its girl-led experiences as a child and then followed their dreams as well. Kathleen Clontz was a Girl Scout for 50 years, while living in seven different states and in Japan.

When asked how the Girl Scouts prepared her for going into the military, Clontz answered, “Girl Scouts gave me confidence as a leader, a love of service, and a love and appreciation of the United States.”

Clontz was ranked a SSG (E-6) in the U.S. Army and served for seven years. She now volunteers her time as a troop leader in Athens, Tenn.

A local leader who uses her scouting skills today is Katie Boggs, co-owner of a nonprofit focused on counter-trafficking work named “Raising a Voice.” The organization has two overseas locations in Kenya and Argentina, as well as a drop-in center for women in sex work in East Knoxville.

“I was a Girl Scout through my Gold Award in Maryville,” said Boggs. Soon she will be opening a coffee shop called “Likewise Coffee” on Magnolia to support the nonprofit.

“We are really excited to deliver the snowmen!” said Winton who will be part of the team distributing them to patients. Each snowman creation is sure to bring smiles because it is as unique as the patient it was made for and the girl who created it.

In August, the GSCSA and the Girls Scouts of the USA (GSUSA) rolled out 42 new badges for girls in every grade. From coding to adventuring in the mountains, the badges encourage independent decision making, moving beyond comfort zones, and building confidence in leadership abilities for the girls. Nine cybersecurity badges and three space science badges are now options for sixth through twelfth grade girls to pursue.

The GSCSA has almost 14,000 girl and adult members, and is open to kindergarten through twelfth grades girls to join throughout the year. For more information, visit www.girlscoutcsa.org or call 800.474.1912.