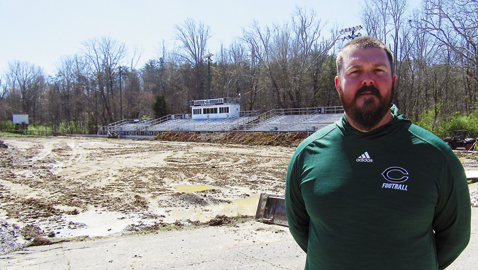 Derek Witt is glad to be home and giving back.

“I’m just honored to be back,” said the 1994 Carter High School graduate and the Hornets’ new head football coach last week. “I’ve been giving to other communities for years. The opportunity to come back here and give back to the kids of Carter is very close to my heart.”

Witt was selected to take over the head post after Jeff McMillan retired following last season.

Witt was an assistant on McMillan’s staff the past two seasons, helping coach offensive linemen in 2015 and serving as linebackers coach last fall.

While teaching at Jefferson County High, Witt also was the Hornets’ offensive coordinator in 2013 – Heath Woods’ last season as head coach at Carter. Witt got a teaching position at Carter in 2015.

He has reached a couple of milestones in football, one as a player at Carter and one as a former head coach at Karns.

An All-Stater as a senior offensive and defensive tackle in 1993, Witt helped lead the Hornets to the second round of the playoffs, the first time a Carter team had made it that far in school history.

Bobby Kimball was the head coach that season. The Hornets, a Class 4A team out of the five classifications at that time, defeated Elizabethton in the first round before falling to Cleveland in the second round.

Derek went on to graduate from East Tennessee State University, majoring in education.

His coaching milestone occurred as Karns’ head coach in 2011 when he guided the Beavers to a 6-4 record – the school’s first winning season in 37 years. The historic sixth win was recorded against Anderson County. Karns lost a high-scoring game at Science Hill in the playoffs.

Witt was Karns’ head coach for three seasons (2010 through 2012) before taking a new teaching position at Jefferson County.

What kind of program will Carter fans be seeing under Witt?

“We’re going to be very hard-nosed,” he answered. “We’re going to get back to a hard-hitting team, that when you walk off the field you’ll know that you’ve played us, win or lose. You’ll know you’ve been on the field with Carter High School.

“We’re going to be high energy and fast moving offensively and defensively.”

The 40-year-old Witt, who is the school’s technology engineering teacher, also has “a love for track and field.”

Derek threw the shot and discus and ran on some relay teams himself in high school. He was head track coach at Karns and is Carter’s head coach in girls track, although he works mainly with the girls’ and boys’ jump and hurdle events and some with the sprinters.

“I push the track program really hard and try to get as many of the football players involved as possible,” he said.

Participation in the girls’ and boys’ track programs has increased significantly since last year.

While there were only two female track athletes last season, there are eight this spring, Witt said.

“Thirty of our skill players in football are running track, doubling the number we had last year,” he added.

Carter, which is one of the Knox County schools getting a new artificial turf for the 2017 season, will start spring practice May 3 and finish up with a scrimmage game at Gatlinburg-Pittman on May 19.

“The field is scheduled to be completed in mid-June,” said Witt. “It’s going to be centered more on the press box and we’re going to have a little more room on the sidelines. That’ll make it a little easier for the ‘Git back’ coaches. It’s definitely going to look different around here.”