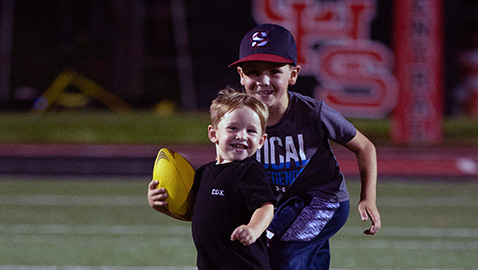 Pressley’s Hornets did it on the road too, winning at Campbell County 24-13 Friday night in a non-region game.

In his comments on Saturday to The Focus, Pressley expressed his pride in the players and fellow coaches after the first win.

“I’m very proud of our team and staff for the win,” said Pressley. “Campbell County is a very well coached team and they jumped on us early. Our guys fought and overcame mistakes to control the second half.

“It’s nice to get the first win of the season and learn how to finish. Excited to see this team continue to improve and grow as the year goes on.”

Pressley said the key to the win “was our defense adjusting and shutting out a high-powered offense in the second half.”

Carter, which lost 20-14 in overtime to traditionally strong Rhea County at home in Week 1, will return to Strawberry Plains this Friday to host Seymour in its Region 2-5A opener.

Another highlight of Week 2 saw The King’s Academy topple Gatlinburg-Pittman 39-13.

Week 3’s schedule will include Bearden making its debut at Kingsport Dobyns-Bennett. The Bulldogs had to cancel their first two games of the season due to COVID-19 concerns.

SPECIAL WIN: The day after Grace Christian Academy stunned South-Doyle 15-0 Thursday night, Rams Head Coach Rusty Bradley said: “This win was one of the most special wins that I have ever had in my career.”

“I am proud of how hard our guys competed,” added Bradley. “South-Doyle beat us badly last year and our guys were extremely motivated to play better this year. In my opinion, we won the game because we played with passion and effort.”

ANXIOUS MOMENT: Central Coach Nick Craney admitted he was “nervous and then relieved” after seeing Bobcat standout Liam Fortner go down with 9:59 on the fourth quarter clock against Fulton Friday night.

What at first looked like a possible knee injury ended up being a cramp.

Central already has lost one key player this season. Jaidin Horton, an All-State safety in 2019 who was expected to be a force on offense as well this year, broke his collarbone in a preseason intrasquad scrimmage about a week before the season opener.

LEADING THE WAY: In this coronavirus pandemic year, Tennessee and Alabama high schools were the first to kick off the football season in the South on Aug. 20 and 21.

Louisiana teams will be the last to start playing in the South with openers slated for Oct. 8.