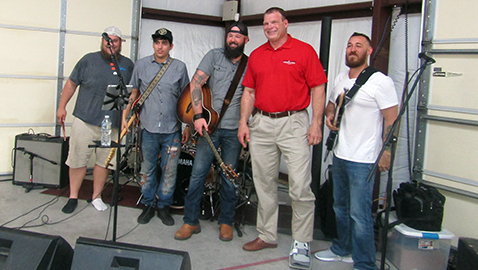 The smell of barbecue permeated the sultry auction hall at Powell Auction’s Company’s auto sales facility and the Matthew Hickey Band played the tunes of Lynyrd Skynyrd, the Zac Brown Band and Steve Earle while supporters waited for Knox County Republican Mayoral Candidate Glenn Jacobs to make his appearance at a rally kicking off the early voting for the upcoming election.

The weather outside was hot and humid. The auction hall was also a bit toasty but the supporters braved the heat as their candidate spoke briefly after being introduced by outgoing county mayor Tim Burchett, who is currently campaigning for a U.S. Congressional Seat.

“I’m not a professional politician and I’m not going to fill this room with more hot air,” Jacobs said. “My motto is ‘Together, we win.’ Things are going well for Knox County, but we can make things better,

Throughout his campaign, Jacobs has not done television or radio advertisements. Instead, he has relied on personal appearances, door-to-door visits and word-of-mouth to spread his message and his vision for the county.

“When I decided to run for mayor, I knew that people didn’t want a career politician,” Jacobs said. “They wanted one of them. I am one of you.”

“I think that’s one of the biggest issues facing us today and we’re going to need everybody to change this. Government can spearhead the effort but we also need the help of our schools, our churches and our community.”

Jacobs also commended Burchett for his eight years of service to Knox County.

“I would like to thank Tim Burchett for the last eight years,” Jacobs said. “Because of Tim, I won’t have to come in and clean up a mess.”