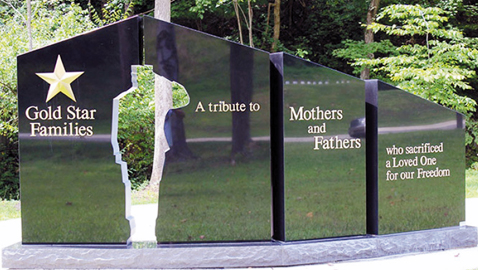 On Tuesday, November 22, a very special dedication will take place at the East Tennessee Veterans Cemetery on Governor John Sevier Highway. While the cemetery holds the remains of veterans and their spouses, a monument will be dedicated to honor the Gold Star Families, the survivors of those veterans who died while serving in the U. S. Military.

American Legion Post 2 partnered with the Hershel “Woody” Williams Medal of Honor Foundation to build the monument. Williams was a Medal of Honor recipient and worked as a cab driver who delivered Western Union telegrams notifying families of their loved one’s death in battle.

“This is a fitting tribute to the sacrifices that our Gold Star Families have made and the American Legion Family is pleased to be part of this project,” the Legion announced.

Instrumental in obtaining the striking monument for Knoxville were Joleen Dewalt, Rene’ Goupil, the American Legion Post 2 and Mayor Burchett. Knoxville has been honored as one of the most patriotic cities in the United States and hosted the Congressional Medal of Honor Convention in 2014.