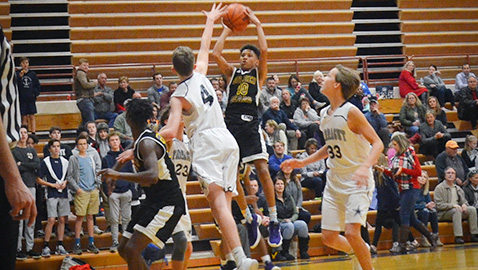 But it wasn’t easy.

The Golden Bears got off to a fast start to nab a 37-33 Knox County Middle School Basketball Conference victory over Farragut on Monday, Dec. 10 at the Bobby J. Henry Gymnasium.

Vine (12-0) opened a 25-10 lead over the Admirals but Farragut chipped away and pulled to within 32-20 by third quarter’s end before storming back. Ashton Sulack put the Admirals (8-4) within striking distance when his shot made the score 35-33 with 20.1 seconds left in the game.

Vine would survive this test. The Golden Bears sealed the game when Marshuan Bower knocked down a pair of free throws with 13.5 seconds to go. He’s one of the top Vine players but those were his only two points against Farragut, which eliminated the Golden Bears from the James A. Ivey Jr. Memorial Basketball Tournament quarterfinals in February.

“We’ve won 19 in a row [on the road] and that’s all we care about,” Vine coach Jerel Heyward said. “I was glad to see Marshuan make those free throws. He’s worked really hard.

As the regular season enters its final week, the Golden Bears are the last remaining unbeaten team in a wide-open league.

Farragut coach Randy Swartzentruber, understandably isn’t all that enthused about moral victories, but he was pleased with squad’s comeback effort that came up just short.

“I’m proud of our guys. We’re not into moral victories but Vine is really good and there’s no doubt about that,” Swartzentruber said. “I called timeout with one minute left in the third quarter and I told our guys that we stayed with them for a quarter.

“We had a rough first half but we proved that we could play with them and they’ve got some shooters.”

Alex Doerger, a seventh-grade center led the Admirals with 12 points. Dallas Carbagh added six and Griffin Mashburn had four, all in the fourth quarter when Farragut was making its comeback run.