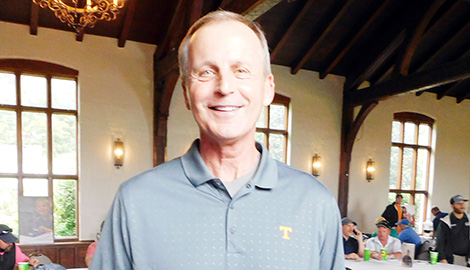 More than 120 golfers braved some intermittent showers to play in the tournament at Holston Hills Country Club on Monday, Sept. 24. The tournament, which has now been played for two decades, is one of the largest fundraisers for the Emerald Youth Foundation, a ministry which strives to help the community’s youth largely through sports and education.

“People come to play golf but they realize this is about more than just golf,” Emerald Youth Foundation Chief Executive Officer Steve Diggs said. “They know that they are helping our kids and golf is a fun way for these people to get involved.

“This is our 20th year of this tournament and we’re proud to have had Regal Entertainment Group along with us the whole way.”

The tournament, which was played for the second consecutive year at Holston Hills, may have been going strong for two decades.

But it got huge boost four years ago when University of Tennessee men’s basketball coach put his name on it and his support behind us. Barnes, who led the Volunteers to a regular-season Southeastern Conference Championship and a trip to the NCAA Tournament, serves on the organization’s Board of Directors. He became involved in the Emerald Youth Foundation shortly after arriving in Knoxville.

“Jim Haslam told me about this when I got here and I decided to get involved. I got to know Steve Diggs and I love the work that they do with our youth,” Barnes said. “It’s hard to believe that this is my fourth year here and involved in the tournament.”

Emerald Youth Foundation does work that’s close to Barnes’ heart. The Tennessee coach, who grew up in North Carolina, spent much of his childhood as a latch-key kid.

His mentors were his coaches and teachers.

“When I grew up, I had people who came into my life and really make a difference,” Barnes said. “And I know that the people at the Emerald Youth Foundation make a difference. These kids may not know it right now.

“But one day, they’ll look back and see that somebody made a difference. The Emerald Youth Foundation is doing great things.”

Last year’s tournament was held after the Vols had already begun preparation, so Barnes didn’t stay. This year, however, he did stick around. He, however, didn’t play.

“I’m going to ride around. I’m not going to play because I don’t want to embarrass these guys,” Barnes joked.

The Big Orange Hoopsters began practicing the following day so basketball was already on the coach’s mind.

“We’re just working to get better every day,” he said.

The tournament was also played less than 48 hours after Tennessee’s football team was routed by archrival Florida at Neyland Stadium. It was a tough loss for new coach Jeremy Pruitt and, of course, Barnes was asked about that after he struggled when he came to Knoxville.

“Coach Pruitt is in the process of building a culture and it’s hard because if you ask any coach, he thinks he should win every game but it takes time to build a culture.

“It took us over two years to get the culture where we wanted it.”