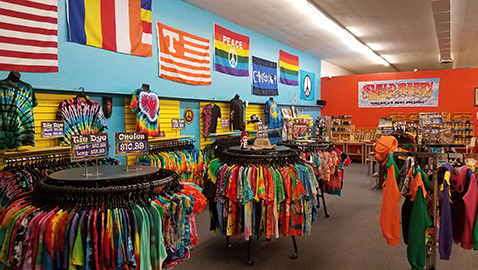 If you are in a ‘60s state of mind and longing for that tie-dyed shirt, then than Good People is the store you’ll want to visit.

Rick Whitener and Kathy Dawn, son and mother, operate the family-friendly ‘60s themed store located at 4026 Chapman Highway. It’s something they’ve wanted to do for years and Kathy refers to herself as a “Hippie Chick.”

You’ll find all kinds of fashion, gifts, stickers and lots of tie dye there. What you won’t find is pipes, rolling paper, bongs, etc.

“There are a lot of people who love the ‘60s culture and we wanted to create a store where everyone can shop because doing good feels good,” Whitener said. He said he wants to organize Good People volunteers to pick up trash and help the South Knoxville area.

Whitener said that they have been open about six months and would have opened earlier but he suffered a broken foot.

“We got a slow start but business is picking up now,” he said.

He was previously a camera operator at the PBS of Knoxville and for UT games. Whitener also worked for Scripps and ION TV. His mom spent years in marketing at the News Sentinel.

When asked what is the bestselling product at Good People, Whitener said “incense.” He said that many people who had shopped at The Disc Exchange are discovering that Good People sell a wide variety.

The store not only offers a wide variety of tie dye products but also encourages people to bring items in to tie dye there. Good People also keeps blank tee shirts there that can be tie dyed. Whitener said that they will show or help people tie dye and customers then take the garment and the know-how home.

What’s the most unusual tie dye request the shop has had?

“That would be a bed sheet,” Whitener said. His mom added “and men’s underwear.”

When people come in expecting to find pipes or such the store refers customers to nearby smoke shops.

“We get a really good mix of people coming in and we’re open for the entire community no matter their beliefs or persuasion,” he said.

You can find Good People online at www.goodpeopleknoxville.com and on Facebook. You can also call the store at (865)851-3335.

“We invite anyone who wants to share their ‘60s style,” he said.