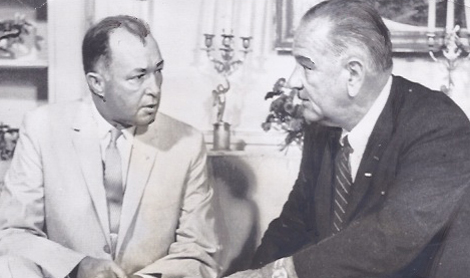 From the author’s personal collection.
Governor Buford Ellington (left) with his friend President Lyndon B. Johnson

Buford Ellington is perhaps best remembered today for being one of Tennessee’s “leap-frog” governors, alternating terms with Frank Clement.  For almost twenty years, Clement and Ellington ruled Tennessee from the governor’s office.

Ellington was not a native Tennessean, being born in Holmes County, Mississippi June 27, 1907.  Buford Ellington attempted to go to college, studying religion, before he was forced to abbreviate his education due to lack of money.  Ellington settled in to become editor of a small newspaper in Durant, Mississippi and found the time to marry Catherine Ann Cheek, who was later to make an especially gracious and lovely First Lady for Tennessee.  Ellington’s move to Tennessee apparently came about because his wife Catherine was a native of Marshall County.  Mr. and Mrs. Ellington moved back to Marshall County, where Buford became a store keeper in the tiny hamlet of Verona.  Ellington later became a salesman for the American Harvester Company during the difficult decade of the 1930s.  Eventually Ellington worked for the Tennessee Farm Bureau as a salesperson, working his way up to a supervisory position.

Buford Ellington’s first taste of politics came in 1944 when he worked for Jim Nance McCord in the latter’s successful gubernatorial campaign.  McCord was something of an institution in Marshall County, both as a businessman and politician.  McCord had held various local offices for decades and had been elected to Congress in 1942.  McCord ran for governor in 1944 with the support of Tennessee’s senior United States senator, Kenneth D. McKellar, as well as E. H. Crump, leader of the Shelby County political organization.  McCord was so strong a candidate, he faced little or no opposition in either the Democratic primary or general elections.  Ellington surely became well acquainted with Jim Nance McCord from their common Marshall County residency.

Ellington picked another winner in 1946 when he agreed to serve as campaign manager in Marshall County for Congressional candidate Joe L. Evins.  Evins was challenging one-term incumbent Harold Earthman in the Democratic primary and won a convincing victory.  Evins was to remain in Congress for thirty years.

In 1948 Ellington himself became a candidate, winning a seat in the Tennessee General Assembly from Marshall County.  Ellington returned to his duties as campaign manager in 1952 when thirty two year old Frank Clement ran against Governor Gordon Browning.  Browning was a veteran of Tennessee’s political wars and was seeking a third two-year term.  A long-time opponent of the Crump machine, Browning had been around for decades, while Clement was fresh, young and a remarkably able speaker on the campaign circuit.  1952 was the end of an era in Tennessee politics; not only did Clement beat Browning, but Congressman Albert Gore defeated K. D. McKellar, who remains to this day Tennessee’s longest serving United States senator. With the election of Frank Clement as governor, Ellington was rewarded for his service by being appointed as Tennessee’s Commissioner of Agriculture.  Tennessee’s Constitution had been altered and in 1954 Frank Clement was the first governor eligible for a four-year term.  Clement easily turned back a challenge from Gordon Browning, seeking to vindicate his loss in 1952.  Buford Ellington would serve throughout most of Clement’s tenure as governor and became one of the most important members of Clement’s campaign organization.  Having been Clement’s campaign manager, Ellington was well poised to take advantage of that organization when he declared his own candidacy for governor in 1958.  With Clement unable to succeed himself, numerous Democrats sought to win the nomination that year.  Former governor Prentice Cooper announced he, too, was a candidate and might have been a formidable candidate, but allowed himself to be talked into dropping out to run against Senator Gore.  Ellington still faced viable opposition from Edmund Orgill, Mayor of Memphis after the death of E. H. Crump.  Orgill was more liberal and had the informal support of many of Senator Estes Kefauver’s friends and allies throughout Tennessee.  A more conservative candidate, Judge Andrew “Tip” Taylor of Jackson, also ran.  Buford Ellington was profoundly more conservative in his views than Frank Clement.  With the conservative vote divided between Ellington and Judge Taylor, who was an avowed segregationist, there was every reason to believe it would be a close election.  Senator Gore handily beat former governor Prentice Cooper to win renomination, although in losing, Cooper won more votes than Ellington did in winning the gubernatorial nomination.  It is interesting to speculate what would have happened had Prentice Cooper insisted upon running for governor yet again.  Ellington barely edged Orgill and Taylor to become the Democratic nominee for governor in 1958.  The election was indeed close; Ellington won with 213,415 votes to Orgill’s  204,629.  “Tip” Taylor was a close third with 204,382 votes.

The Republican Party was not able to mount a serious change to Ellington in the fall, although that would soon change.  Yet Ellington did have opposition in the general election from former governor and his old mentor Jim Nance McCord, who ran as an Independent.  McCord was seventy-nine years old and while he lost badly, he tallied a respectable vote.  Buford Ellington succeeded Frank Clement as governor and it is not surprising he continued many of the same policies initiated by his predecessor.  Ellington was also the beneficiary of the times, as Tennessee survived a brief recession in 1958 and the economy was good for the most of Ellington’s governorship.  The economy allowed Governor Ellington to give both teachers and administrators a raise without angering taxpayers by raising taxes.

Although many have assumed that relations between Frank Clement and Buford Ellington were close, especially with the leap-frog government, but there were serious and fundamental political differences between the two.  Clement pondered a bid against Senator Estes Kefauver in the 1960 Democratic primary, but quickly decided against it.  Ellington had little liking for Kefauver and when his former opponent Andrew “Tip” Taylor began mounting a challenge to Senator Kefauver, Governor Ellington promised him the full support of his administration.  One primary difference between Frank Clement and Buford Ellington was presidential politics.  Ellington was strongly in favor of Senate Majority Leader Lyndon B. Johnson of Texas, while former governor Frank Clement backed Massachusetts Senator John F. Kennedy.  Clement proved to be the more prescient of the two and when LBJ was selected as Kennedy’s running mate, the powerful Majority Leader, much to Ellington’s dismay, helped to reelect Estes Kefauver.  Ellington was forced to abandon his pledge to a furious “Tip” Taylor of lending the full weight of his administration to Taylor’s senatorial campaign.  Kefauver beat Taylor handily.

Ellington could not run again in 1962 and Frank Clement won the Democratic primary to return to the governor’s mansion.  Clement’s third term in office was not as successful as his previous administrations and Tennessee politics was turned on its head with the unexpected death of Estes Kefauver.  Much of Clement’s last term in office was concerned with his desire to be elected to the United States Senate.  Clement lost the 1964 senatorial primary to Congressman Ross Bass, who only narrowly defeated Howard Baker in the general election.  Baker was leading a revitalized Republican Party from the ashes and it was abundantly clear that the GOP was competitive in statewide elections.

Governor Clement managed to reverse the verdict in the 1966, narrowly beating Senator Ross Bass, but was stunned when he lost the general election to Howard Baker.  Buford Ellington, consigned to the sidelines for four years, was making his comeback that same year.  After leaving the governor’s office, Ellington had briefly worked for the L & N Railroad before accepting an appointment from President Lyndon Johnson as the Director of the Office of Emergency Planning in 1965.  Ellington had toyed with the idea of running against Senator Gore in the 1964 primary, but finally decided against it.

Ellington’s appointment was only a momentary stop before he launched his reelection campaign in 1966.  Buford Ellington’s comeback was complicated by the candidacy of Nashville attorney John Jay Hooker, Jr.  Hooker was young, handsome, a flashy-dresser and a candidate who especially appealed to young and liberal Democrats.  Hooker was a sharp contrast to the conservative and balding Ellington, who looked far more like an accountant.  Ellington got an endorsement from Governor Clement, who was engaged in his own bitter primary campaign with Senator Ross Bass.  Ellington also had the support of President Johnson.  Hooker had the enthusiastic support of the Nashville Tennessean, while Ellington had the editorial backing of James Stahlman’s Nashville Banner.

Despite having won Governor Clement’s endorsement in his primary campaign, Buford Ellington did not return the favor.  Ellington conspicuously refused to endorse Clement in his own campaign.  Ellington’s campaign slogan that year was “The Man of His Word” and one wonders what “Tip” Taylor thought of that.

Buford Ellington, once a segregationist himself, sent a signal that he had changed his beliefs, appointing a black to serve as an administrative assistant.  H. T. Lockard would later go on to be elected judge of the Shelby County Criminal Court.  Governor Ellington was forced to mobilize the National Guard when civil rights leader Martin Luther King was assassinated in Memphis to prevent rioting and looting.

Once again unable to succeed himself, Governor Ellington did little to help the Democratic ticket in 1970.  When his nemesis John jay Hooker won the gubernatorial nomination, Ellington refused to endorse him and many believe he secretly supported Republican nominee Winfield Dunn.  Ellington’s former press secretary, Hudley Crockett, had run against Senator Albert Gore in the primary and won an impressive vote.  The bitter primary campaign certainly helped GOP Congressman William E. “Bill” Brock, III beat Gore in the general election.

As Buford Ellington left office in 1971, Republicans had won two vital statewide elections. Ellington assumed the status of an elder statesman, although he was relatively young and it is entirely possible he might well have run for governor yet again in 1974 had not death claimed him earlier.  Buford Ellington was playing golf with friends in Florida when he suffered a fatal heart attack that swiftly took him away on April 3, 1972.  Ellington was only sixty-four years old at the time.

Buford Ellington was the last of his kind to serve as governor of Tennessee.  An old-fashioned conservative Democrat, Ellington’s passing marked the end of an era in Tennessee politics and history.