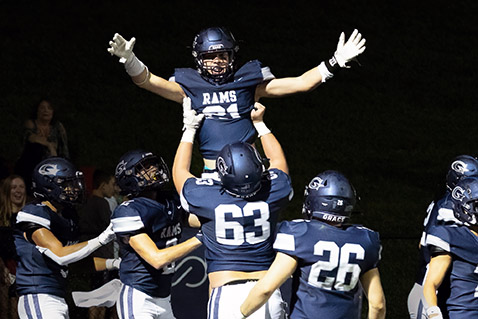 The defense led the charge and others joined in as Grace Christian Academy notched its first win of the season by turning back The King’s Academy 28-8 in a non-region football game Friday night.

Coming off an open date after two close losses, the well-rested Rams pulled away in the second half and now look forward to another home game this week against Ezell-Harding Academy of Nashville.

“They didn’t score a point in the second half and we came up with a ton of turnovers,” said GCA Head Coach Justin Long. “Our coaches had a great plan and did a really good job this week.

“I think that was huge, keeping them out of the end zone and turning them over and our offense was able to find some life toward the end.”

The loss dropped the Lions to 1-3.

“I thought our kids fought really hard and they definitely gave themselves some chances to win, but a penalty here, a missed block, we fumble. Right now we’ve got a bunch of young guys who are learning a lot. Unfortunately, we are learning a lot on Friday nights through our mistakes.”

Grace Christian senior defensive lineman John Hicks set the tone on the very first play when he got his hand on sophomore quarterback Avery Jordan’s pass to force an incompletion.

TKA went three and out and the Rams scored on their first possession. A catch and nifty move by senior standout Pierce Browning on quarterback Weston Edmondson’s third-and-10 pass turned into a 38-yard gain to the Lions’ 27. Bobby Lewis ran around left end on the next play for the touchdown. Browning’s two-point toss to Jackson Eller made it 8-0.

The Lions would pull even on the first play of the second quarter when Zeke Connatser scored on a 4-yard run and tacked on the two-point conversion. A 40-yard pass from Jordan to Mekhi Paddock was the big play in what turned out to be TKA’s only scoring drive of the night.

The King’s Academy played strong on defense in the second quarter that included a blocked field goal by Alijah Davidson. GCA senior Talon Earlywine responded with a tackle for loss and pressure on the TKA quarterback to get the ball back.

Lucas Hollifield kicked field goals of 42 and 25 yards in the third quarter to put Grace Christian ahead by six points (14-8).

“My thinking was if we can’t draw them offsides (on fourth-and-two at the 8), we need to get points,” said Coach Long. “I didn’t want to try to force anything. I have a lot of trust and faith in our kicker, so I wanted to make sure we got points out of that possession.”

Braden Ray pulled in a catch on a 37-yard pass from Edmondson that was right on the money to extend the Rams’ lead to 21-8 early in the fourth quarter.

Ronen McCarthy recovered another TKA fumble near midfield with 8:41 to go.

King, in the game at QB, faked a handoff to Browning and ran into the end zone from four yards out to cap the scoring with 6:09 remaining.

“It was encouraging to see a lot of different players make plays tonight,” said Coach Long.

“I’m really proud of where we are. I think we’ve shown flashes of being a pretty good football team. The challenge this week was to do it for four quarters and I’m so glad we were able to put a game together and come out on top … But there’s still work to do.”

TKA’s Coach Sellers said: “It gets better each week, but we haven’t got to the point where we can put it all together and go out and win on Friday nights yet.