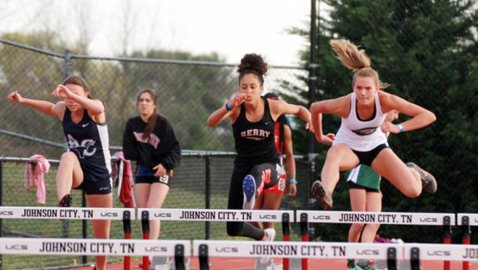 “The thing I’m most proud of as a student is just remembering that grades come first and always making time to do what I had to with school work,” said the school’s Student-Athlete of the Year for 2015-16 last week via e-mail.

“As an athlete, I am most proud of giving it 120 percent all the time and never letting anyone tell me I can’t do something. In volleyball and in track, I loved being someone that the other girls could talk to and relate to.”

Coming back from foot surgery, which caused her to miss just about all of her junior season in track and field, Reynolds, a Carson-Newman University signee, placed fourth in the Class A-AA state pentathlon this past spring.

Shelby was surprised when she learned she was her school’s Student-Athlete of the Year and called it “a huge honor because we had several student-athletes sign to colleges for various sports.”

But Reynolds made a mark beyond athletics as Athletic Director John Anderson pointed out on the day she signed with C-N, praising her for her involvement with the school’s special needs children and Special Olympics as a peer tutor.

“Shelby has a loving spirit and a loving heart,” said Anderson, “and that’s part of what makes her special even beyond her accomplishments on the track and field.”

Since her busy spring, which also saw Reynolds place third in the triple jump and fifth in the 300-meter hurdles at the state, she’s been resting and enjoying the summer.

“I have also been volunteering with coaching several kids up at the track alongside of Coach (Derek) Witt,” said Shelby. “I love it and it has made me realize that one day I want to come back and coach because it’s great to see a kid get the skill you’re teaching them. It’s also helped me more as an athlete in my events because it reminds me of certain details to remember when performing them.”

In college Reynolds will compete in the pentathlon during the indoor track season and the heptathlon (seven events) during the outdoor season. In addition to the 100-meter hurdles, high jump, shot put, long jump and 800 run, the heptathlon also includes the 200 dash and javelin throw.

“I am really looking forward to competing on the collegiate level,” said Reynolds. “Being a multi-sport athlete has made me into who I am, and I am very happy to have never focused only on one sport.

“I am blessed to have gotten all the awards I did in high school, but I am ready to see what collegiate-level track has in store for me.”

Chandler Viscardis, male Student-Athlete of the Year at The King’s Academy, picked Maryville College to continue his football career. Now it’s the Scots’ turn to figure out what side of the ball Chandler plays the best.

The versatile Viscardis, a wide receiver and strong safety, was a two-time All-Stater at TKA, one year on offense and one year on defense.

As a senior for the Lions, he also was all-district in baseball and played basketball, adding “valuable minutes,” stated Athletic Director Marc Weekly.

The King’s Academy female Student-Athlete of the Year is Niamh Schumacher, who was a three-time state champion as a junior.

Schumacher breezed to the state title in the TSSAA Division II-A cross country state meet last fall, finishing 37 seconds ahead of the second-place finisher. Her winning time over the 5K state course was 18 minutes, 53.97 seconds.