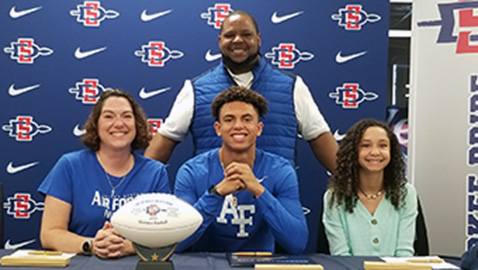 From South of the River to the Wild Blue Yonder.

He is one of several seniors on the Cherokees’ 2019 state quarterfinal football team who will continue their football careers and education on the next level.

Curtis saw something special when he made a visit to the Air Force Academy.

“At first I was opposed to the military lifestyle. I thought that wasn’t for me,” said Santana. “But you get up there and get around the players and the coaches, and you realize there’s a mentality that’s more work driven and they’re focused.

“And post college, it’s a good degree and it’s a great job afterwards.”

Choosing to go to a military academy, Curtis’ commitment will extend for five years after graduation.

“First, I was committed to Navy, so the military lifestyle was always for me I’d say, but as soon as I went up to Air Force, I really liked it up there, and two weeks later I committed.”

The reporter told Santana he had always loved the Air Force football uniforms and asked what the jagged thing was on the helmets.

“The lightning bolt,” answered Curtis, who said he liked the Air Force football uniforms. “I really like the colors – they got black, white, blue and gray. They even got a yellow one this year.”

The reporter mentioned he had long been a fan of Army, Navy and Air Force – the Academy teams – and no matter what; they always seem to be tough to beat because of their mental and physical toughness.

“It takes a lot,” said Curtis. “You’ve got to go through basic training when you first get there, and that’s all mental right there. But then, overall throughout your training at Air Force, you’re trained as a military officer and football is attached to that, so to be a football player at an Academy you have to have mental fortitude and physical toughness.”

Curtis said he was recruited by Head Coach Troy Calhoun and his staff as an “athlete” and expects to play cornerback or safety for the Falcons. Air Force is a NCAA Division 1 member of the Mountain West Conference.

Curtis earned All-State honors this past season and made The Focus / Coaches’ All-Knox County team as a defensive back, although he also started at wide receiver.

“Santana is self-made,” said South-Doyle Head Coach Clark Duncan. “He came in as a freshman and was smaller than a lot of his classmates. He really took to a great work ethic and went to the nutrition end of it. He’s a fighter and really grew between his sophomore and junior year. He was a phenomenal player for us.”

The 6-foot, 175-pound Curtis never came off the field and played in the kicking game, too.

“That’s just his mentality,” said Duncan. “He’s just gonna always fight. He wants to be on the field. He wants the ball in his hands.”

Curtis also excelled in academics and had a 26 on the ACT and a 3.73 GPA, taking all the AP courses.

“He’s got a chance to be great,” added Duncan. “Go to Air Force and not only play at that level of football, but at the same time, be able to serve his country and then have a great career. He’s so smart. He’s going to get into Engineering. He’ll just do great things.

“He set himself up for great opportunities.”