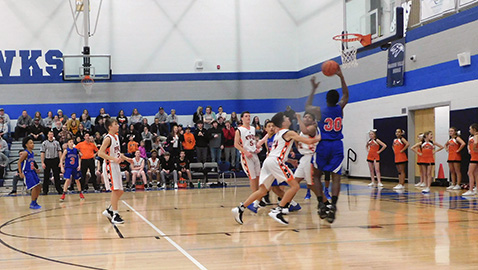 Powell Middle School’s left handed shooting guard went ice cold for almost two periods, but fired in a 3-pointer to end a serious Cleveland run late in the third and the Panthers held off the Blue Raiders 42-35 in the Section 1 AAA tournament at Hardin Valley Middle School Thursday night.

The victory advanced Powell (25-2) to Saturday’s championship game against Vine.

Greene finished with 14 points, but his “3” with 1:06 left in the third period might have been his biggest as Cleveland had gone on a 9-0 run to start the second half, cutting the Panthers’ lead to 22-21.

Cleveland (18-8) never got that close again.

All of Cleveland’s scoring came from two players – Jacob Kinpson (22) and Rodney Broadnax (13).

Powell Coach Darin Courtney said “defensive effort” was the key to the win.

“When you’re playing a team that big and athletic, we had to have a lot of heart on the defensive board. And their length can cause any team problems in half court, but we had some patience on offense and made big shots.

“Greene made a key 3 late. Burkhart overall was just outstanding. Our muscle guys (Cason Huffaker and Emmett Burns) were just battling their guts out.

“And tonight the player who won the game for us was Jardett. He had those buckets early in the first half. He hit a jumper to put us up by 10. Just big-time plays and effort.”

Cleveland Coach Derek Morris felt the difference in the game was Powell being the aggressor early. Powell ended the first period with an 8-0 run to go up 13-6.

“We had to match the intensity,” said Morris. “Our boys fought. We came back and made it a game. But basketball is a game of runs and they went on one more run than we did.”

Sure enough. A 6-0 run by Powell in the fourth period turned a six-point lead into 12 (38-26) with 53.9 seconds remaining. Kinpson swished in three shots from 3-point range after that, but the Blue Raiders ran out of time.

“Powell had a couple of guards (Burkhart and Greene) that were big, thick kids who could handle the ball and shoot well,” said Coach Morris. “If you jump out and try to take away the 3, they drive the ball very well. Some of their supporting cast understood their role, which was just to be dogs and go rebound, and they made us really work on the boards. They are a well-coached team.”

Looking ahead to the finals, Coach Courtney said: “Two Knoxville teams are in Top 8 in the state, and I’m not surprised. I’m happy for our (Knox County) league, and in our first year in this (TMSAA Section), we put two teams in the finals.”