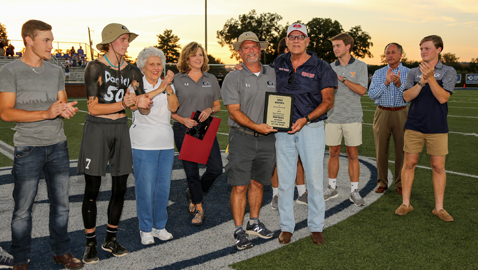 Gregg Bostick (left), Director of Football Operations at Grace Christian Academy on a volunteer basis for the past four years, receives the award for being selected by head football coaches, athletic directors and game day officials from across East Tennessee as the recipient of the inaugural East Tennessee CAREacter Star Support Staff of the Year award Oct. 6 at GCA’s game with CAK. Making the presentation is Dave Moore, founder of the CAREacter Star Athlete and CARE 365 programs. Following the game, GCA Head Coach Rusty Bradley presented Bostick with the game ball on the field in the presence of both teams, coaching staffs and fans who had gathered for post-game prayer at the 50-yard line.

“It was a special, humbling evening all the way around,” said Bostick.