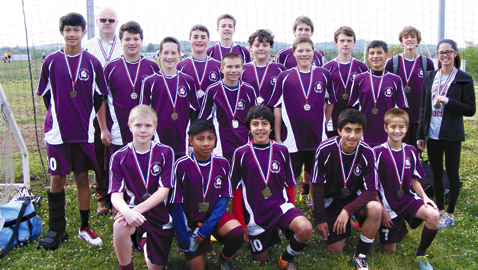 The Gladiators notched a 1-0 win over West Valley to claim the title. Gresham finished the season with a 10-1-1 record.

Evan Downen scored the lone goal of the championship match against the Wolves on Sunday, May 18.

Gresham opened the championship tournament with a 0-0 draw against Christian Academy of Knoxville.

In that game, Spencer Smith played goalkeeper. He shut out the Warriors. He’s normally a field player but held CAK scoreless despite playing only half of a game during the regular season.

“This is just amazing,” Gresham coach Robert Buckler. “For Gresham to take a team of 18 kids and do what we did is unheard of.

“I had 18 players and only four have played club soccer. But these kids made a commitment to play for their school. These kids are middle school kids and they had other commitments but when we went to the tournament, they played like they’ve never been off the soccer field.”

After salvaging a draw with the Warriors, the Gladiators outlasted Maryville 1-0.

Emrakh Kamilov tallied the lone marker of that match.

Goalkeeper Logan Easterday, who missed the tournament opener to attend his brother’s graduation, was victorious in the shutout wins over Maryville and West Valley. He also received plenty of help from a stingy Gladiators’ defense, which was led by Noah Petit and Matthew Cox. Both are forwards who were playing out of position.

“In my six years, this is the first time that we’ve been able to really compete with these teams and I can’t say enough about our defense,” Buckler said. “I had two kids in Noah and Matthew who normally play forward positions and they just took control.

“These were hard-fought games against good teams. The two wins were not cheap wins.”

Buckler also said that he appreciated the parental support on the team.

“I’m really proud of my parents,” he said. “We couldn’t have done what we did without their support.”