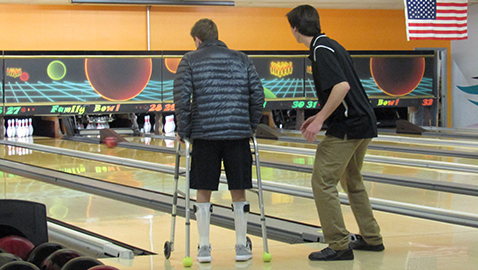 As I was going back to my car to get the camera to take pictures of the recent District 4 high school bowling tournament, I noticed a teenage boy coming in to Family Bowl wearing leg braces and using a walker.

Otherwise, he looked healthy. Maybe he had been in an accident, I thought, and he might be coming to see some friends who were in the tourney.

I got the camera, came back inside and started taking pictures. A little while later, I heard a loud cheer from the area where the Bearden and Hardin Valley Academy boys’ teams were competing for the District 4 championship.

The boy with the walker was up on the lanes. Will Gross was a member of the Bearden bowling team. Coach Jennifer Allen had put him in the match as a substitute.

Will’s first ball went into the gutter. But his second attempt knocked down six pins and he was greeted with the loudest ovation of the afternoon.

In my many years of covering high school sports, most of what I’ve reported has been on what’s happened inside the lines. But every now and then, I’ve come across prep athletes with physical or personal challenges they have to tackle.

When I spoke with Gross later, he told me had always worn leg braces but had hip surgery before the holidays, which made it necessary for him to use a walker until he’s cleared by his doctor.

“I have to bowl in six matches to letter,” said Gross, explaining why he was participating. He had bowled in five previous matches. He and teammates already have ordered letter jackets they hope will arrive in time for the team banquet, when letters will be awarded.

Gross said he was “born with low muscle tone over his entire body from an undiagnosed disease.” He began physical therapy and started wearing leg braces when he was six months old. He also underwent his first hip surgery when he was in the sixth grade in 2012.

Will said the highlight of his season was bowling a 101. “I won that game, too (over his opponent),” he added.

Gross also plays recreation basketball and baseball as a second baseman and catcher.

“Basketball is my love,” said Will. “But I had a lot of fun being on the bowling team. I learned a lot about bowling technique and the scoring system used.

“Bowling offers a good team environment. It was fun traveling to away matches, eating together after games and the camaraderie with teammates. I wish I had been able to get into bowling sooner in high school.”

Coach Allen said it has been a joy to have Will on the bowling team this year.

“Will is a great kid,” she said. “He is an inspiration for all. He does everything that everyone else does and never complains.

“I have seen Will in other gym classes, but I didn’t really get the pleasure of knowing him until this year. He is very conscientious. He is a great student, respectful, always has a great attitude and is lots of fun to be around.”

Gross plans to attend the University of Chicago, Vanderbilt or UT and is considering a major in business.

He said he plans to check out bowling opportunities too when he gets to college. He’ll make a good teammate.