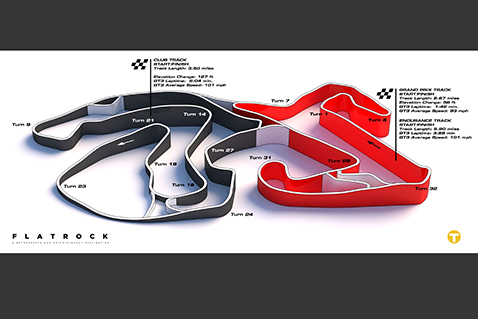 By next spring, the motorsports footprint in Tennessee is scheduled to expand exponentially.

If all goes according to plan, phase one of Flatrock Motorsports Park, which will be located on some 773 acres in the Cumberland County town of Westel, just west of Rockwood, will be completed. The vision for the project has been more than 20 years in the making.

“Like a lot of men I always had it in my heart to be involved in motorsports,” FMP founding partner and president Rusty Bittle told the crowd of 200 or so at a groundbreaking event on Oct. 26. “I talked (some friends) into buying a couple of carts back then. We raced those things in parking lots all over Knoxville for several years.”

“That’s where my passion started and over 20 years ago I started looking for a piece of land just to build a cart track,” Bittle said. “My vision came to have almost 800 acres and a motorsports park that includes carting and a six-mile road course with a lot of amenities to be enjoyed with it.”

Partners, investors, and business and county leaders were on hand for the event. According to Bittle, more than $100 million will be spent to make his dream a reality. Some 100 jobs are expected to be created initially.

Phase one will complete the tracks and get cars rolling. The amenities that other phases of the project will include are a hotel, along with a restaurant, winery, brewery, campground, retail center, and amphitheater. The goal is to appeal to a wide spectrum of entertainment tastes that go way beyond motorsports.

The attempt at mass appeal is part of Bittle’s passion. He wants to make the park a motorsports “destination.”

“It was a vision for a destination that would enrich a community,” Bittle said. “I wanted a park that would provide individuals and families memories they would never forget.”

According to a press release, the park will include a 3.5-mile circuit club track and a 2.4-mile Grand Prix track, for a combined six miles of endurance tracks. It might one day attract both Nascar and Formula 1 races.

The rolling-hills geographical backdrop of the park, which was originally planned for Oak Ridge, not only provides natural beauty, but a 34-turn challenge to drivers. The design and construction of the tracks will be done by Tilke Engineers and Architects, which specializes in motorsports racetracks.

“We really believe it’s going to be the best racetrack,” said a spokesman for Tilke.

“If this is what Flatrock calls a groundbreaking, I absolutely can’t wait to see the grand opening,” said Allen Foster, mayor of Cumberland County. “What’s exciting to us is the economic impact this will have on our area and the state.”

According to the press release, an independent firm hired by Tilke estimated that in its first five years, FMP will generate approximately $100 million in revenue.

“We don’t wanna be just a motorsports park,” said Bittle. “We do wanna be a destination.”