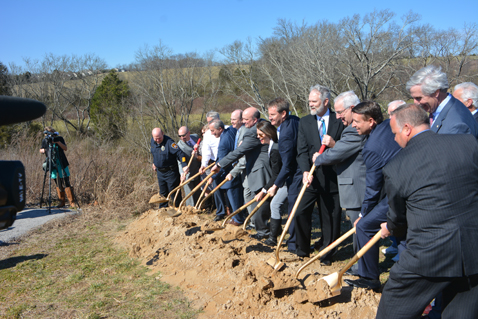 The Gibbs and Hardin Valley communities had reason to celebrate Friday as they each took one step closer to the construction of their new middle schools.

As groundbreaking was about to take place Friday morning at the site of the future Gibbs Middle School, several elected officials spoke to the crowd gathered. One of the speakers was Mike McMillan, the school board member who has been working on a middle school there for years.

“One morning I was sitting on the back porch drinking coffee and the phone rang. I realized it was Dr. McIntyre and he had just had some conversation with the Mayor. I knew they had been working a little bit on it,” said McMillan.

“I could sense the excitement in his voice. He said there were some minor things still to be worked out and we went over the major things and I said, ‘I think it’s great, can we pass it before the board?’” McMillan said.

“When he said that I knew we were off and running,” McMillian said, adding, “And it had a real shot.”

Lots of thanks were given by all the speakers and McMillan specifically thanked Knox County School Board Chairman Doug Harris. “Without Doug’s commitment to it we would not be standing here today,” he said.

Harris said the Gibbs community is a “champion of education” and called McMillan “your favorite son” before the crowd that included many residents from that area.

Mayor Tim Burchett said the groundbreaking was “an exciting day and the result of a lot of hard work by a lot of great people.” He thanked Dr. McIntyre, Commission Chairman Dave Wright, and school board members Terry Hill and Mike McMillan.

“From day one there’s been a couple of things he was interested in,” Burchett said of Wright, “and this is one of them.” He thanked the school board and the commission for their patience and mentioned the efforts of his staff, specifically, Chris Caldwell and Hugh Holt, and many others who put in years of effort in getting the future schools.

“Classroom teachers and parents make the biggest difference in students’ lives more so than any of us do,” Burchett said.

Superintendent James McIntyre spoke briefly and mentioned diversity in our community and praised the Gibbs community for support of getting a middle school there.

“In today’s world there’s not enough compromise, people working together, across different perspectives. This is a really good example of what can happen,” he said.

“I won’t be here after July but I hope you’ll invite me back for the ribbon cutting,” McIntyre said.

The new school, The Focus learned, will actually be served by two roads, the first exists now and will be for school buses coming up by the elementary school. A second road will be built to serve the other side of the new building for cars and it will exit from Tazewell Pike opposite the Gibbs High School.

The groundbreaking for Hardin Valley took place Friday afternoon in the north parking lot, behind Hardin Valley Academy with a host of community members and officials attending.

“This is an exciting day and it’s a very gratifying day,” said McIntyre before the Hardin Valley ground breaking.

He reemphasized, “There’s not enough collaboration—there’s not enough working together to make things happen that are beneficial for our children and our community so I think today is absolutely an example of how we can work together.”

“Having these two new schools is a wonderful addition to our community.”

Sixth District School Board Member Terry Hill and Sixth District Commissioner Brad Anders, wo worked very hard to bring these projects to fruition, echoed the superintendent’s comments saying it was a great day for the Hardin Valley and Gibbs communities.