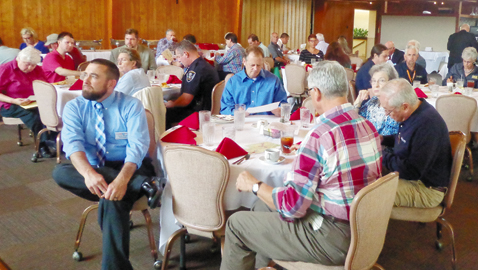 The Halls Business and Professional Association usually draws a good crowd for their meetings at the Beaver Brook Country Club and Tuesday was no exception. Business professionals from the community heard of proposals about the future of Halls Crossroads, some designed by University of Tennessee graduate students.

Liz Albertson, senior planner for the Metropolitan Planning Commission, guided the audience through a media presentation of what the place could look like in the future, emphasizing the possible “mixed use” districts there.

The proposals, not yet adopted by the planning commission, call increasing walkability and greenways, and building a plaza where people could meet, hold farmers markets, etc. One proposal suggests extending the current city-only bus lines to Halls by way of a “bus-only lane” along Maynardville Pike.

“We’re calling for mixed use for all the county and not strictly commercial use,” she said.

She added that Knox County’s population is forecast to increase by 40 percent by 2030. She said that the proposals included helping water runoff and quality and making Emory Road mostly residential.

It was announced by a TDOT spokesperson that paving for the Maynardville and Norris Freeway would begin this week during the night and a traffic signal would be reworked for Maynardville and Emory Road.

Dennis Jones of Cross Connections Plumbing addressed the audience and said the company is an extension of their ministry. He said the company helps teach Habitat for Humanity homeowners how to maintain the plumbing in their houses.