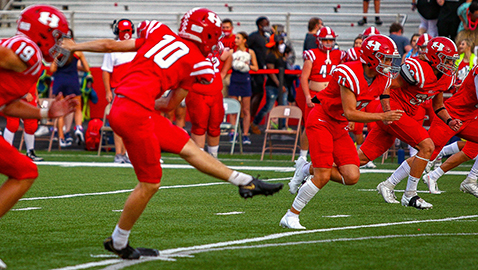 For months there was uncertainty on whether there would be a high school football season in 2020 because of the coronavirus pandemic.

The season is at least off to a start and Gibbs and Halls received the distinction of being the first two teams in the state to begin play Thursday night at Dinzel “Dink” Adams Field.

How long this season will continue is still uncertain. In fact, just hours before the Eagles and Red Devils kicked off at 7:07 EDT, news broke that a fifth Knox County team – Karns – had been sidelined or had its schedule altered by COVID-19 in Week 1.

For the record, Halls won the game 31-17, pulling away from a 17-all tie early in the fourth quarter.

But after it was over, it was evident on both sides that just playing the game was more important than winning the game on this night.

“It’s great,” said Halls senior receiver Ty Hurst with a big smile on his face. “For a long time I didn’t think I was going to be able to play. It’s good to have at least one game.”

Not surprisingly, the teams, which had only been allowed to have intra-squad scrimmages in the preseason, made some errors right off the bat.

Gibbs was assessed a dead ball foul before its first snap and then fumbled on a pitchout to set up Halls at the Eagles’ 16-yard line.

The Red Devils gained only a yard on their first two downs and then lost 14 yards on a sack by Gibbs’ Eli Hubbs that pushed Halls back to the 29. Jake Mercantel salvaged three points with a 46-yard field goal.

Gibbs, after recovering an on-side kickoff at the Halls 42, settled down on its next possession and quarterback Colton Qualls completed a 16-yard pass to the 26. The Eagles couldn’t pick up another first down and settled for a 37-yard tying field goal by John Aidan-Pittman.

With safety the focal point of the night for fans and those on the field, Hurst became a safety valve for quarterback Ty Humphrey late in the second quarter to help put the Red Devils back ahead.

On the play, Humphrey rolled right and was about to be thrown for a big loss but managed to throw a pass back across the field where Hurst was waiting all alone near the left sideline. Hurst caught it and raced to Gibbs’ 3-yard line – a 64-yard gain – to set up Connor Proffitt’s short TD run on the next play. Mercantel’s kick made it 10-3 with 4:17 left in the second quarter.

“It was a great play for him to break a tackle and make a play right there,” Hurst said of Humphrey’s pass under pressure. “I thought he was getting sacked right there.”

Hurst said it was a designed play, a “half roll and then throw back.”

Gibbs beat the clock and again knotted the score before halftime. Keegan Katz returned the kickoff to the 45. Bryson Shown and Bryson Walker caught key passes to put the Eagles at the 3 with 37.7 seconds left.

Then came a great play call with a little razzle dazzle. Qualls pitched to Bryson Palmer going left. Palmer stopped in his tracks and threw back to Qualls, who was wide open going right. The 3-yard scoring pass and Pittman’s PAT tied the score 10-10 going into intermission.

Joe Neilson produced another big play for Halls in the third quarter, taking a pass from Humphrey and scampering 50 yards down the left sideline to the Gibbs’ 35 to get the Red Devils rolling to their second TD.

Catches by Jaydyn White and Nolan Faust put the ball at the Eagles’ 8, where DJ Hunt scored on a draw play up the middle. Mercantel’s kick made it 17-10.

Gibbs again came back to tie the score when Walker got behind the secondary for a 33-yard TD catch and Pittman’s kick made it 17-all with 10:10 remaining in the game.

Halls wasted no time retaking the lead. Nielsen grabbed Humphrey’s first down pass in the flat and streaked 65 yards down the right sideline to put the Red Devils ahead for good. Mercantel’s PAT made it 24-17.

Both coaches felt Halls’ depth was a factor in the outcome.

Gibbs also had four offensive linemen that missed the game because of injuries.