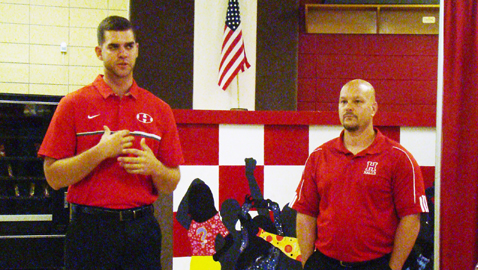 Both were introduced to fans, players, parents and to the community on Monday, July 24 at a meet and greet at the school.

Both replace Randy Moore, who coached both the Red Devils and Lady Devils for the past eight seasons. Moore, who went to Halls to coach the boys nine years ago, recently resigned to pursue business opportunities in Florida.

Smith, 26, is a graduate of St. George’s Independent School in Memphis. He will coach the boys and teach history at Halls High. He was most recently an assistant at Morristown East High School.

He said that the opportunity to coach the Red Devils is a tremendous opportunity.

“This is my dream job,” Smith said. “I’m a relatively quiet guy, but on the court, you’ll find that I’m pretty animated. “This is a dream come true, to get a chance to coach in a community like this.

“But I’m not animated to the point where I’ll embarrass Halls. I’m animated because I love the game.”

Smith said that he prefers to coach an up-tempo game but that he must adjust his game to fit his personnel.

“I like to play an up-tempo style and press on defense but you have to play the game to fit what you have. I look forward to meeting our players and getting the chance to watch them play.”

While Smith is new to Knox County and to Halls, Poisal is no stranger to Halls basketball fans.

He coached the girls at Halls Middle School from 2010-2014 and has taught physical education and wellness classes at the school for the last nine years. He began his Knoxville coaching career as an assistant coach with the Bearden High School girls team under Nathan Hodges.

After a brief hiatus from coaching, Poisal returned to the middle school game where he coached the Gresham Middle School boys during the 2016-17 season.

He said that he’s wanted to coach at Halls High for several years.

“I’ve taught at the middle school for the last nine years, and for eight-and-a-half of those years, I’ve had my eyes on the Halls High School job. This is a chance to coach in the community where I work and teach.

“I just fell in love with the Halls Community.”

Like Smith, Poisal prefers the up-tempo game but he also said that he would mold his style to fit the players on his roster.

“If I had my way, I’d press from the time we get off the bus until we leave,” said Poisal, who will continue to teach at Halls Middle. “But your style has to change.”

Poisal’s squad will consist largely of freshmen and sophomores when he Lady Devils hit the hardwood later this year. But he knows his players because he’s either taught them or coached them with the Lady Demons.

“We want to win games, but first and foremost, we want coaches who will make our players better people,” Miller said. “These are high character guys.

“We heard nothing but good things about them from former employers and former players when we got phone calls.”