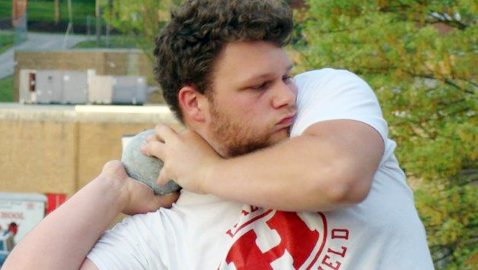 Babe Ruth made 60 one of the great numbers in sports when he hit that many home runs in 1927. And just recently, Kobe Bryant’s farewell NBA performance was made even grander when he scored 60 points.

The number 60 is special for high school shot putters, too, says Halls senior Cole Patterson, who tossed the shot 60 feet, 1 inch for the state’s best throw this season during the East Tennessee Track and Field Jamboree at Farragut on March 5.

“Sixty feet is a long way for a high schooler,” said Patterson. “It kind of distinguishes you into the elite class of shot putters in the country.”

Patterson is still trying to duplicate or better his personal record. He was disappointed in his performance after a meet at Halls last week when he threw 59-5 on his first attempt and then scratched on his other three throws.

“I didn’t like it,” said the 6-2, 290-pounder. “I came in expecting to throw about five or six feet farther. I didn’t do so hot and had trouble staying in the circle.

“I just got to throw more and be more consistent in practice, make myself stay in the circle. That’s about all you can do in this sport.”

Even though Patterson didn’t put the 12-pound ball as far as he wanted, he out threw his closest challenger by almost 20 feet.

Patterson, who had been a two-way tackle for the Red Devils in football but didn’t play last fall so he could focus on track, also has the top throw in the discus event (161-11) in the Knoxville area.

He started competing in the shot put when he was 11 years old and in the sixth grade at Halls Middle School.

“My dad threw the shot put in high school and college and he showed me how to do it,” said Cole.

His father, Ryan Patterson, went to high school in Oklahoma and also played football at UT.

What goes into the making of a great shot putter?

“People think it’s all about how much weight you can lift and who’s the biggest and the tallest, and it’s really not,” answered Patterson. “Best shot putters are probably better ballerinas than most Broadway actresses. It’s all about footwork and technique. That’s the most important thing in being a good shot putter and discus thrower.

In short, Patterson likes calling it a combination of strength and finesse.

Patterson signed April 13 with Liberty University, a NCAA Division 1 member in Lynchburg, Va., and said he may take up the hammer event in college in addition to the shot put. He said he will probably major in pre-med.

For now, his first goal is to again throw 60-1 and then win a state championship.