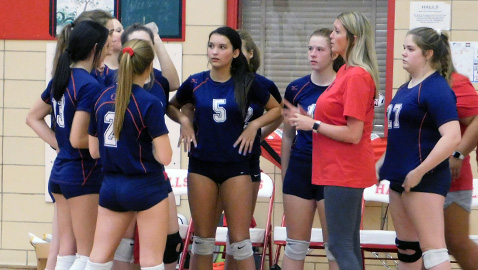 As for Kilgore, she couldn’t be more excited even though she didn’t have statistics available after the match.

“I don’t have stats. We don’t keep stats, and I know that sounds terrible,” Kilgore said. “But we won and that’s the stat that really matters. That’s a team stat.”

The new coach may not have known the numbers, but she had plenty to be excited about.

The Lady Beavers opened a 4-2 lead in the first set before the Lady Devils stormed back and got a big lift from Sloane Baldridge, who took serve with Halls leading 11-8.

She reeled off six consecutive service points to give her squad a 17-8 lead.

Halls got an additional lift from Morgan Ward, who had four-point service run to give Halls a 23-10 lead. Karns scored a pair of points before Cassie Norris closed things out with an ace.

The Lady Devils opened a 14-8 lead in the second set on an ace by libero Naomi Gribinet. But the Lady Beavers battled back and pulled to within 14-11 as they picked up service points from senior Julie Gray.

The second set was the closest of the night and Karns coach Igor Popov saw some glimpses of things he liked despite seeing his team drop to 0-2 overall and 0-1 in the district.

“We’re a good team and we just have some little things that we need to fix,” Popov said. “We’re a young team and right now, it’s just the little things.”

The third and final set was again tightly contested and Halls surrendered the first point. The Lady Devils, however, didn’t trail after that.

Ward sealed the victory with an ace.

Karns got solid performances from Emily Engle, who finished with six kills, and Emma Yarbrough, who had five.