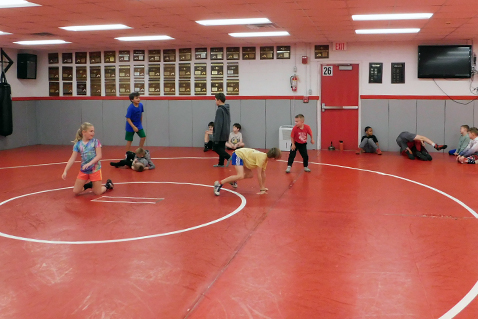 The original high school wrestling program in Knox County resides in Halls. The Red Devils first fielded a team in 1969.

It’s been one of Tennessee’s top high school programs since its inception more than five decades ago as it has six state champions in its illustrious series in former coach Chris Vandergriff, his son, John, current head coach Shannon Sayne, Colton McMahan, Caleb Leonard and Cody Humphrey (Sayne’s brother-in-law).

It is also one of the few schools in the area to have its own on-campus practice facility. It moved into the old football field house when the Red Devils football team moved into its new home several years ago.

The wrestling facility at Halls High includes a coach’s office, a weight room, two mats and both boys’ and girls’ locker rooms.

The facility recently received a facelift and the girls’ locker room was added before the start of the 2022-23 season as the Lady Devils now have a full roster and a full-time head coach in Meagann Kiser.

Kiser is a Halls alumnus, a three-time state medalist who finished third on the grand stage as a senior for the Lady Devils. She competed collegiately at Campbellsville in Kentucky before returning home to North Knox County.

The renovations took contributions from local businesses, parents and other people in the community as Knox County Schools finds itself financially strapped.

“We’re very fortunate to have a community like Halls and good parents,” Sayne said. “I grew up in Halls and the community really comes together and it just helps, knowing that you have that kind of support when you have a school system that is limited in what it can do.

“We have a lot of community support and that’s what makes Halls so special.”

Tindell’s Building Materials also stepped up to help the Red Devils. The building supply store donated lumber for the renovations.

Other entities also chipped in to make the Halls High wrestling program’s home a bit more pleasant for some of the area’s top athletes.

The facility is also home to the community’s youth program and used by Halls Middle School.