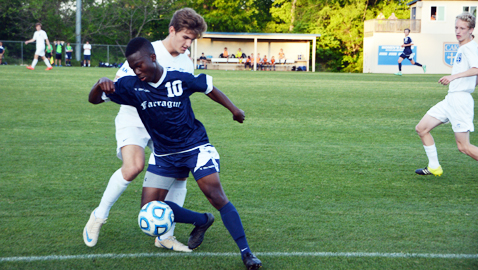 “This is a total team effort,” Warriors coach Jon Day said after his squad posted a dominating 3-0 victory over Farragut at CAK. “These boys have been working really hard in training and tonight, we saw it all pay off for them.

“Farragut has some nice attackers and we played some really good defense. They have a great team and we’re just fortunate that we’re able to book them to play a game every year. This was a total team effort for us from the backline, to the middle, to the boys up front.”

The Admirals (9-3-4) have held the upper hand in the series between the two West Knox County soccer powerhouses. CAK last beat Farragut at home in 2012 when the Warriors prevailed 2-0. The two sides drew in 2010 and the Warriors won a thriller on the road in 2009 when the two squads clashed in 2009.

CAK (13-2-1) outshot Farragut 11-4 and took a 1-0 lead when senior Jon Creel scored on a ball that deflected off Admirals goalkeeper Eli Lewis and into the back of the Farragut net in the 10th minute.

Scoring opportunities for the Admirals, who completed a tough week at CAK, were sparse Thursday night and coach Ray Dover implored his team to play with a sense of urgency throughout much of the second half.

But the urgency never seemed to come for Farragut, which played a rebuilding West High squad to a 2-2 tie Tuesday night. The Warriors controlled the tempo and dictated the pace of the match, especially after halftime.

“We had some chances early on but they were sporadic,” said Dover, Farragut’s first-year head coach. “They only thing you can do with a game like this is learn from it.

The Warriors took a 2-0 lead when junior midfielder Matt Zayzak tallied in the 56th minute.

Creel added another insurance marker in the 79th minute. He said the win was big for the Warriors.

“This was a good team effort for us,” said Creel, who has scored many big goals in his four-year varsity career at CAK. “I’ve been here for four years and this is the first time that we’ve beaten Farragut since I’ve been here.

“This win was really special for our program.”

For Farragut, it was another match where it struggled offensively.