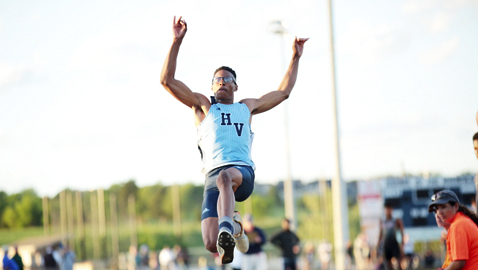 Things are back to normal in Knoxville Interscholastic League track and field. Hardin Valley Academy’s boys team has rejoined its girls team at the top.

The Hawks, which saw their three-year KIL reign halted by Bearden last season, restored order last week by racking up 137 points at its home stadium and finishing with a 41-point margin over the Bulldogs (96).

HVA Coach Bryan Brown said it felt “pretty good” to have both of his teams No. 1 again. “Our kids performed great all across the board. We scored in many events and I was proud of our kids.”

The Lady Hawks extended their KIL streak to six years, piling up 192 points. West was runner-up with 132½ points.

Really, all that seemed to be missing was the broom.

“We had a lot of great performances and capped it off with a school record in the 4×400-meter girls relay,” said Brown. “It was a great way to finish the meet.”

Senior leadoff runner Gia Faoro, junior Lizzie Davis, freshman Ellie Bachmann and sophomore anchor Kensi Gray combined for the record time of 4:01.64. They were hoping to go under the four-minute mark and will most likely have other opportunities to do so before the end of the season.

The HVA girls also won two other relay races. Faoro joined Tori Adams, Haley Stinnett and Timaya Ray on the victorious 4×200 team which was clocked in a stadium record 1:42.90. Kiara Inman led off the 4×100 relay that won in 49.47 seconds. Adams, Stinnett and Ray also carried the baton in that event.

In the girls’ field events, Hardin Valley swept the top three places in the triple jump. Dean won it with a leap of 34 feet, 9½ inches. Hampton was second and Sidney Wallace third as the trio combined for 24 points.

Hardin Valley went 1-2 in the shot put. Symphony Buxton won it with a toss of 40-11¾ and Mandy Prescott was second.

Dean also took first place in the high jump as she cleared the bar at 5-4½. Hannah Greene was runner-up in the pole vault.

On the boys’ side, Hardin Valley notched four victories in the track events. Kenton Bachman won the 800 run in 1:57.33 and anchored the Hawks’ 4×800 combo that included Miguel Parrilla, Alex Freshour and Tommy Banker and was clocked in 8:07.68.

The Hawks also collected 15 points by placing 3-4-5 in the shot put event.

In the nine-year history of Hardin Valley Academy, its girls and boys track and field teams have now combined for 10 KIL championships – six by the girls and four by the boys.

Hardin Valley also has won 10 KIL cross country titles (also six by the girls and four by the boys).

The 20 total KIL championships in the two sports have come in seven years, as the school did not win a title the first two years it was open.