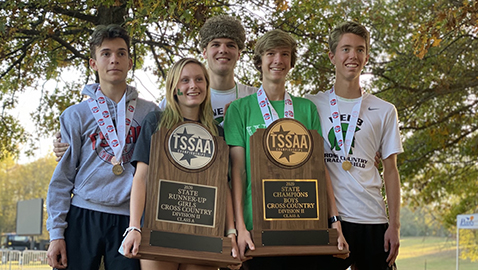 Hardin Valley Academy’s boys cross country team had already made a statement this season that it was the best team in Knoxville Interscholastic League history when it posted a perfect team score of 15 in the KIL meet.

The impressive numbers the Hawks put up Thursday at the state meet in Hendersonville make a strong case that they may also be one of the best ever to run in the TSSAA.

Hardin Valley blew away the Division I Large field with its 33-point total. Franklin came in a distant second over 101 points away at 134.

With three of the top five finishers running as individuals and not figuring in the team totals, Hardin Valley had the “2, 3, 4, 7 and 17” point-getters to cross the finish line. That adds up to 33.

Counting all runners, HVA junior Kaden Keller came in fourth place with a time 15:52.61 over the 5,000-meter course at Sanders Ferry Park.

“Our kids ran a great race,” said Coach Bryan Brown. “They were focused on having a tight pack and getting out front and controlling the race. We led at the mile and two-mile, and held on for the victory.

“The team this year worked extremely hard. We have 14 boys that could have been on the line today. Our depth is very strong.”

Lebanon senior Aiden Britt was the individual winner in 15:29.69.

Signal Mountain was team champion in Division I Small. Will Douglas posted a winning time of 16:01.78.