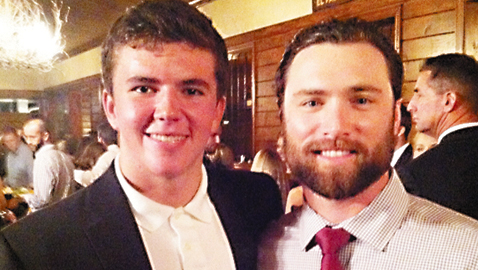 Four South Knoxville products will be the featured speakers at Hardin Valley Academy’s baseball leadoff dinner this year, thanks to HVA social studies teacher Lisa Myers, who has ties to South Knoxville herself.

“I signed up for leadoff banquet duty, with my guys in the back of my mind,” said Myers, who taught at Doyle and South-Doyle high schools for a combined 26 years and is now in her fourth year at Hardin Valley.

Myers’ “guys” are Chad Bell, Chad Zurcher and brothers Bryce and Jared Brentz. She encourages everyone to come and hear their “inspirational and remarkable stories of grit, success and perseverance” on Tuesday, Jan. 24.

“You can hear how Chad Bell, well on his way with the Rangers, pitching in AAA, blew out his arm and battled back from Tommy John surgery,” said Myers.

Bell, 27, is now with the Detroit Tigers.

“You can listen to Chad Zurcher, one of the best shortstops around, who went to Memphis,” continued Myers.

Zurcher stood out at Memphis and played through many injuries.

“He was drafted by the Mets but was plagued by more surgeries,” said Myers, “but he had a Plan B. He received his Master’s in sports management and is now UT’s director of baseball operations.”

Like the previous two, the 28-year-old Bryce Brentz also had to overcome setbacks and injuries, and more than once, said Myers, but made it to “the Show” as a leftfielder with the Boston Red Sox.

“Bryce never quit, always made the best of the situation and rallied.

“But the real story is Jared Brentz,” pointed out Myers. “Born with a birth defect, he faced life in a wheelchair. At the age of 12, he decided to have both feet amputated so he could play sports. He then went on to win the World Para Long Drive Championship. Jared drove a golf ball 409 yards.”

As a former four-sport athlete at Porter and William Blount high school and a basketball, softball and track coach at Doyle High, Myers, who is in the Blount County and Hiwassee Sports Halls, can appreciate the stories of the four men who she’s known for years.

“I love these boys like they were my own,” she said. “I am so proud of them and the young men they have become.

“I had them in class. I used to do the PA at South-Doyle baseball games and they would go pick up my son Skylar at the daycare for me when I was announcing. When the two Chads were little and played Biddy Basketball I refereed their games.

“I don’t think I’ve ever heard anything bad about any of them. They are some of the best to come out of South Knoxville. They had a Plan B. Everyone needs a Plan B.”

The leadoff event will begin at 5:30 with a silent auction of sports items. Dinner will be served at 6, followed by the speakers’ presentations at 6:30.

The leadoff dinner also will include a “meet and greet” with the speakers and a preview of 2017 Hardin Valley baseball and what the team could accomplish this coming season.

Tickets for the leadoff dinner are $15 per person. They can be purchased from HVA players or coaches or you can contact Myers at lisa.myers@knoxschools.org or 865-690-9690.