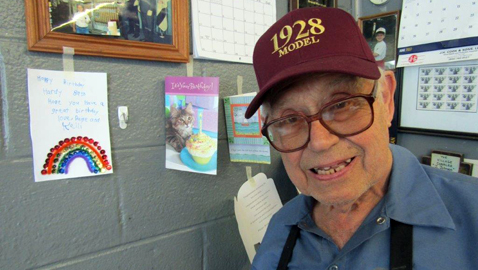 His son Jim, who manages Custom Shoe Rebuilders at 5503 North Broadway St., would normally have been working too, but he had to take his mother-in-law to the doctor. Earlier Jim also had been gone to Michigan a few days to represent the family at the funeral of his father’s brother-in-law.

The shoe repair orders had backed up.

A lot of folks are 89 years old, but not many still work six days a week like Hardy … or on their birthday.

Johnson’s day was brightened early that afternoon when next-door neighbors from Henson’s Automotive and Alignment brought over a half-dozen chocolate cupcakes with chocolate icing and a senior coffee.

“He’s the most excellent human being I’ve ever encountered in my 60 years,” said Vickie Henson. “He’s real. He’s the same every day. He’s just got a smile on his face all the time. It makes you feel good to be around him.”

Hardy is the third in his family’s four generations of shoe cobblers. His grandfather, William Carson, was the first.

“His shop was on what used to be 2nd Avenue,” said Johnson, who believes 2nd Avenue is named Ocala Drive now. “People in the neighborhood would bring shoes by during the day, and grandpaw would fix them at night.”

Hardy said his dad, Hardy Johnson Sr., didn’t have a shop, and worked with someone else.

“I started out with him. There was a real good uptown shop, and my dad got sick, so I took off up there and got a good job.”

Eventually, Johnson bought a shop, and in 1953 established his business, which was located between Knox Road and Maple Drive and near where McDonald’s is today in Fountain City. He moved the business to its present location eight years ago.

“I can set my clock to Hardy every morning at 7:15 when he pulls into the parking lot,” said Steven Henson, who is in his 15th year as owner of the automotive shop next door. “He’s the best neighbor I’ve ever had. He’s a great guy. They’re good people.”

The two “just swap back and forth.” Johnson’s 1999 blue Ford, with only 86,000 miles on it, gets free brake jobs and oil changes from Henson. And Steve gets free repair work on shoes and pocketbooks or anything else.

While Johnson spent much of his birthday working, there were moments of celebration throughout the week.

On the wall at his shop are birthday cards, including a homemade one from a customer’s young daughter that is signed by Paige and Kelli. James sent a card wishing Hardy a happy “90th” birthday. Oops, but it’s on the wall and appreciated just the same.

Dr. Fred Hurst of Halls brought by a box of doughnuts Wednesday morning.

“There were several phone calls and several came by to visit,” said Jim.

Dr. McCampbell, a retired veterinarian from Lenoir City, gave Hardy a cap with the inscription “Model 1928.”

A family supper get-together, including Jim and his wife Teresa and grandson Justin and his fiancée Amanda, was being planned for Thursday night.

Johnson said he’s “thankful” he’s still able to go and do what he does.

“You’ve got your aches and pains, stuff like that,” he said. “My knee is worn out. But I keep going.”

And that, he says, is his secret for a long life.

“Just keep at it. Don’t give up. Keep going. Even though you feel bad or anything, keep going.”

Johnson has a good sense of humor, too.

For instance, when asked if his dog, Shilo, an 8-year-old tan Yorkie he’s had since a puppy, was his buddy, he replied, “Oh yeah … but I should call him Meanness,” he laughs lovingly.

“He sleeps right beside me and snores.”

Hardy said he takes Shilo outside about five times a day.

“He really likes to go to the fence and talk with the neighbors’ dog. They talk about Obama or what’s going on in Washington. He’s a democrat.”

Johnson served in the U.S. Army during the Korean War. The Optimist Club of Knoxville honored him as Grand Marshall of the Fountain City Optimist Christmas Parade in 2011 and he was named Fountain City Town Hall Man of the Year in 2015.

He’ll probably be the man who works on his 90th birthday, too.