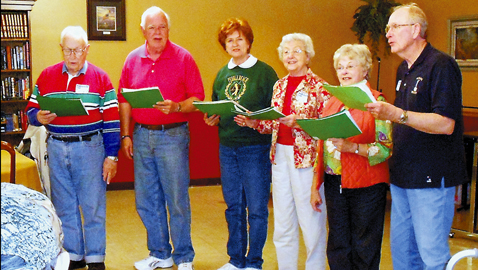 The new gospel singing group that Walter Maples helped to start in 2004 needed a name. They were all choir members, but no longer all members of the late Charlie Hatchett’s department. Thus, the inspirational group “The Old Time Singers” or TOTS was formed.
TOTS originally began with Dorothy Johnson, soprano; Mary Lynn Cameron, alto; Howard Clark, tenor; and bass Walter Maples with wife Margie as accompanist. Later, David and Melba Hill and Jim Ballinger joined the group. Along with their music, TOTS have always included a message in their ministry. Bringing the message was a perfect fit for Howard Clark, the retired pastor and missionary. “Seeing the joy on faces of those we minister to with our music and testimonies and hearing their words of appreciation is hard to describe,” Clark said. “It has been one of my most rewarding musical experiences.” Dorothy Johnson recalls sharing the parable of the lost sheep many times. The words of Jesus tell that when even one of the sheep was lost, the shepherd went in search of it. Jesus is our shepherd, and He wants all who are lost to be saved. That is such a wonderful thought to leave with others after the singing and service ends.
Accompanist Margie Maples shared an interesting connection with TOTS that I had not heard. A spinoff from TOTS was the formation of a male quartet with the four men of the group who became “The Forefathers”—all four were grandfathers and Walter was a great-grandfather! The group provided wonderful harmony until they lost Jim Ballinger to another church and Dwight Black was transferred.
The names in the group have often changed, but the beautiful harmony has never faltered!