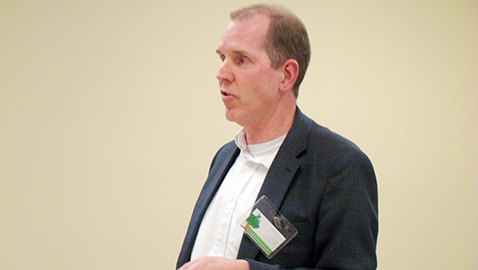 The Fountain City Business and Professionals Association had its first monthly lunch meeting Wednesday, and in carrying on its January tradition, taxes were discussed as Knoxville residents and other Americans prepare to settle their tabs with the federal government.

Hartung, a past president of the organization, discussed the recently passed Tax Cuts and Jobs Act. The controversial legislation was passed in December and it will be implemented during the 2018 tax year.

Hartung addressed the changes in both the individual and corporate tax codes, which take effect.

He was able to discuss and answer questions on some parts of the newly-passed Tax Cuts and Jobs Act. But some remain a mystery and currently up for interpretation.

“Well, there’s a new tax law this year. You may have heard about it once or twice on the news once or twice,” Hartung said. “There is absolutely no guidance out yet and we don’t know what this is going to look like on a tax form.”

The Tax Cuts and Jobs Act was passed by Congress and signed by President Donald J. Trump on Dec. 22, 2017 and calls for tax brackets to shift downward for most taxpayers. It also raises the Standard Deduction from $6,500 to $12,000 for single and from $13,000 to $24,000 for married couples filing jointly.

Personal and dependent exemptions are eliminated along with home equity debt deductions. Employees will no longer be able to deduct work expenses not provided by employers.

University of Tennessee football season ticket holders may no longer make a deduction for the donation they make to the school for the right to buy tickets.  That could previously be deducted as a charitable donation.

Businesses will be taxed at a flat 21 percent rate after previously being a progressive tax for C-Corps. This results in a huge break for bigger business entities that previously were taxed at a rate as high as 35 percent.

The Alternative Minimum Tax, which was originally repealed, was re-added before the final bill was passed. Corporations, however, will no longer have to pay the AMT.

Alimony payments will also be affected in 2019.

“This was supposed to go into effect in 2018 but I think they had problems getting the divorce attorneys together,” Hartung said, with tongue firmly planted in cheek. “So if you’re planning on getting a divorce, you better do it before Dec. 31.”